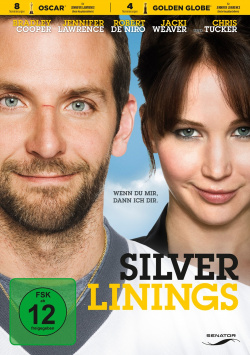 Film: Eight months is enough! Although the doctors strongly advise him not to, Pat Solatano (Bradley Cooper) leaves the psychiatric institution to which he had been admitted after brutally beating up his wife's lover after the time ordered by the court. Now there's only one goal left for Pat: he wants his Nikki back. It's not easy without a job, a house and a restraining order. While he is forced to move back in with his parents (Robert De Niro and Jacki Weaver), he tries to get his life back under control despite all adversities. But then he meets the young Tiffany (Jennifer Lawrence), who has also been thrown off track after the sudden death of her husband. She offers to help him get in touch with Nikki. In return, Pat is to accompany her to a dance competition. But first Pat has to learn to dance. And that brings him and Tiffany closer in a way that reveals an unexpected silver lining on the dark horizon...

Two years after his two-time Oscar winner "The Fighter" David O. Russell delivers a more than due successor with "Silver Linings". Based on the bestseller "The Silver Linings Playbook" by Matthew Quick, Russell has created a wonderfully unsentimental mix of drama, comedy and romance, which can inspire with wonderfully drawn characters, bizarre humour and real feelings far away from any form of kitsch and clichés. It's true that some scenes in which Pat's somewhat neurotic family delivers fierce verbal fights seem a bit over-twisted and exhausting. But these are of course only very small clouds in an otherwise almost perfect sky.

The film is not only carried by its wonderful script, but also by the perfectly cast actors. Bradley Cooper delivers an extremely multi-faceted, Oscar-ready presentation. Whether it's Pat's riot while reading a Hemingway novel, his first non-date with Tiffany, or his unbroken enthusiasm in his quest to win Nikki back, Cooper knows how to bring this difficult character to life with quirky charm and emotional complexity. Even though Pat doesn't always show special sensitivity to his fellow men and especially to Tiffany and vehemently refuses to face reality, his character always remains sympathetic thanks to Cooper's engaging play, which is of enormous importance for the film's success.

Jennifer Lawrence's play is in no way inferior to Bradley Cooper's good performance. She manages perfectly to credibly trace that Tiffany is cynical, strong and emotionally serene on the outside, but in reality is extremely vulnerable and filled with enormous sadness and longing. With this thrilling performance Lawrence proves that she is an extremely versatile and really good actress, who almost incidentally also radiates a good portion of sex appeal. The Oscar was more than deserved for it.

Alongside this great duo, the other actors certainly sink a little. Whether it's a wonderfully quirky Robert de Niro, who is extremely superstitious as Pats' father, or Chris Tucker as Pats' buddy from the psychiatric ward, who never misses an opportunity to get out of the institution, almost all of the supporting actors deliver great performances. But they simply can't compete with the two leading actors and the tingling chemistry that reigns between them. This may sound a bit negative, but at the end it is absolutely appropriate to the story and the staging.

"Silver Linings" succeeds in treating difficult themes such as the death of a loved one, depression or adultery with an infectious light-footedness, without renouncing a certain dramaturgical depth. David O. Russell has created a comic, bittersweet and touching comedy, which in the end shows that even in the darkest times there is always a glimmer of hope. Undoubtedly the most beautiful unromantic romance since "(500) Days of Summer" and one of the highlights of the film year 2013. Absolutely worth seeing!!!!

Picture + Sound: The picture of the DVD pleases with a warm, engaging coloration and a clean look, which is supported by a good overall sharpness and harmonious contrasts. The Dolby Digital 5.1 mix is primarily carried by the powerfully mixed dialogues and the music, the surround channels are rarely really stressed. Only smaller sound effects like the breaking of a window pane and atmospheric ambient noises provide some movement in the tonal events. For a quiet comedy like this, that's quite enough. Good!

Extras: The DVD available for testing unfortunately had no bonus material to offer except for the trailer and further program tips. For the purchase version, however, a Making of, edited scenes, a look at the dance training and a dance course video are announced.

Fazit: "Silver Linings" is a wonderful mixture of comedy and drama, which can score with a perfectly harmonizing actor duo, a great screenplay and above all with touching romance beyond well-trodden kitsch paths. Countless nominations and prizes at various film awards and the good results at the international box offices are therefore more than deserved. Therefore there is also a more than deserved one for the DVD: Absolutely recommendable!