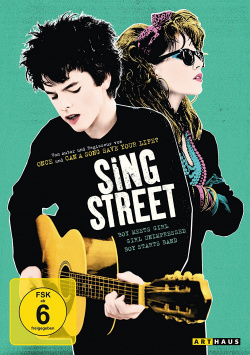 Film: Dublin in the 1980s: 15-year-old Conor (Ferdia Walsh-Peelo) does not necessarily lead a carefree life. His parents (Aiden Gillen & Maria Doyle Kennedy) are constantly arguing and as the recession has his family fully under control, he is taken out of the expensive private school. From now on he has to attend a public school in Synge Street, where he already on the first day the unpleasant acquaintance with strict customs and mean classmates. But then he sees the somewhat older Raphina (Lucy Boynton) on the other side of the street, who at first glance turns his head. In fact, Conor finds the courage to talk to the girl and when she tells him that she wants to be a model, he offers her to play in his band's next music video. There is only one small problem: Conor has no band at all. That has to change as soon as possible…

"Sing Street" is John Carney's third musical direction after "Once" and "Can a song save your life". This time the lifestyle of the 80s is the focus of another very charming story. It is true that the whole thing is set in an Ireland marked by recession and political crises. Yet the film is not a sad social drama. With a lot of humour and even more music, Carney tells a wonderful coming-of-age story about the first great love and the difficulty of finding one's own identity as a teenager. Especially viewers who grew up in the 80s will recognize themselves or someone from the circle of friends in one of the many loveable characters. Carney has succeeded perfectly in tracing this very special musical and fashionable era with a loving wink and at the same time paying tribute to some of the greats of the music scene of that time.

Carney's love for music is especially evident in his ability to show how the right songs can help a person survive difficult times. Music as an expression of feelings - no matter whether you only hear it or make it yourself - is an enormously important catalyst that can help young people in particular through many a crisis. If you can express yourself in this way or if you hear the songs of someone you feel understood by, then broken hearts, problems at school, a lack of future prospects or even the separation of parents can simply be better dealt with. And that's exactly what Carney can make perfectly clear in this film. With a lot of humor, some cruel-comic, yet unfortunately very realistic fashion sins and songs, that once again go extremely into the ears, "Sing Street" hits the audience right in the heart and provides a cosy warmth, which is reflected in a contented smile.

Critics could accuse the film of neglecting the social problems in Dublin too much and of lacking depth. But since the protagonist is a teenager in love, this is absolutely authentic. For Conor, it is not his father's unemployment or his mother's affair that is currently the most important thing in life, but Raphina. And that's exactly why it's absolutely right that this is also the focus of the story and that everything else is rather irrelevant. The fact that he doesn't need his friends to become really good musicians for long may not be entirely realistic. However, it should not be forgotten that this is not a documentary, but an extremely likeable fairy tale about first love - and you don't have to be so precise about reality in all aspects.

"Sing Street" simply offers nice, fun and heartfelt entertainment that allows you to escape reality for almost 100 minutes and simply enjoy a beautiful story. The film is a little bit like a John Hughes version of Carney's earlier films. Children of the 80s and everyone who loves sympathetic coming-of-age films should not miss this work. Absolutely worth seeing!

Picture + sound: The picture and sound quality of the DVD corresponds exactly to what can be expected from a current production. The picture is absolutely clean, the bright 80s colour scheme is harmonious and the contrasts are also on a good level. The Dolby Digital 5.1 mix does not ignite a big surround firework, as is usual for this genre. However, there is always audible movement in the multichannel range due to the music, which can result in a very positive overall impression. Good.

Extras: The bonus material sounds more extensive than it actually is. It consists primarily of short promo clips, with overlaps occurring again and again. The Making of (ca. 4:42 min.) is much too short and doesn't offer any real information about the making of the movie. Afterwards director John Carney and singer Adam Levine talk about the movie (ca. 3:17 min.). This is followed by mini featurettes about the cast (approx. 3:01 min.), the story (approx. 3:28 min.), the music (approx. 2:25 min.) and a short version of the making ofs in German (approx. 3:45 min.). In addition there are two music videos (ca. 3:28 + 3:38 min.) and a making of the video for "Go now" (ca. 3:29 min.). The trailer for the film completes the additional offer.

Fazit: "Sing Street" is a wonderful good mood film for all children of the 80s. It is a declaration of love to the music of this time, but also a charming story about the first great love. The DVD pleases with a decent picture and sound quality. The bonus material is quite extensive, but unfortunately only scratches the surface. Nevertheless, the following applies quite clearly: Absolutely recommendable!