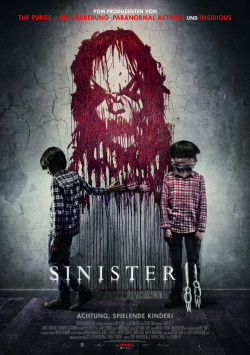 After the cruel death of the Oswalt family a few years ago, the former Deputy So & So (James Ransone) retired from the police service and is now hunting the Buguhuul as a private detective. He now knows that he must destroy all the places where the demon murdered in order to finally drive him away. In an abandoned farm he has found another bloody place of activity of the Buguhuul. But just as he is about to light the house on fire, he has to discover that it is now inhabited again. Here in nowhere Courtney (Shannyn Sossamon) and her two sons Dylan (Robert Sloan) and Zach (Dartanian Sloan) have settled down to escape their violent husband Clint (Lea Coco) - unaware that they are at much greater risk here. The private detective must now try to help the small family before the demon seizes one of the boys. But it already seems to be too late for that...

"Sinister 2" is the inevitable continuation of the surprise success of 2012, which was very well received not only by the audience but also by many critics. The reason for this might have been the very atmospheric production of Scott Derrickson, who primarily used classic creepy effects and was able to build up extreme tension especially in his more subtle moments. For the sequel Derrickson again wrote the script with C. Robert Cargill. However, he left the director's chair to the Irishman Ciarán Foy, who was able to inspire critics and horror fans alike with his debut "Citadel".

The authors and the director deserve credit for at least trying not to tell the same story again, but to further develop the myth around the Buguhuul. However, the storyline around Courtney, who is fleeing from her husband, is simply lacking in tension. There are too many scenes in which the plot just splashes along, which even the gloomy atmosphere can't change much. As soon as night falls and the children's spirits appear to show Dylan the murderous home movies that have already provided some disturbing moments in Part 1, real horror could actually arise. But since the viewer is actually shown everything, the whole thing seems rather boring and quickly tiresome. The ghosts you see are by no means as scary as the things you can only guess.

Even if the film really goes in the direction of horror, it can only convince to a limited extent. There are a few nice moments, but most of it is simply served too tame and hackneyed for real genre fans. Even the nasty home videos in the second attempt are no longer as horrible as they were in part 1. So unfortunately "Sinister 2" is again one of those typical sequels, which is clearly inferior to its predecessor in almost every respect - theatrically, dramaturgically and in terms of goose bumps. A few good scenes at least make sure that the movie hasn't become a complete failure and that horror fans, who like it a bit more tame, still get their money's worth, despite some distinct lengths. So the bottom line is as follows: with some exceptions still worth seeing!