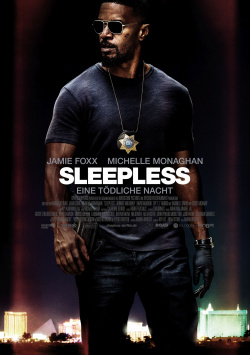 To survive on the hard streets of Las Vegas, the two cops Vincent (Jamie Foxx) and Sean (tip "T.I." Harris) themselves don't always take the law very seriously. When, on one of their illegal tours, they capture an unexpectedly large shipment of cocaine, the joy at the discovery, worth millions, lasts only a short time. Because the cloth belongs to the mighty casino boss Stan Rubino (Dermot Mulroney). Now he wants cocaine back at any price, because otherwise he would get into trouble with the client of the unscrupulous drug baron Novak (Scoot McNairy). In order to prevent this from happening, he is well advised to use any means at all - including the kidnapping of Vincent's son Thomas (Octavius J. Johnson). Now Vincent has to try to return the hot goods to Rubino without his colleague Jennifer Bryant (Michelle Monaghan) getting wind of it. For if the suspicious policewoman gets in his way, it could be life-threatening for Thomas…

For his films "Das letzte Schweigen" and especially "Who am I" director Baran Bo Odar was not only celebrated in Germany. Also in Hollywood some doors opened, so that he could deliver his first US production now with "Sleepless". The only problem is that Baran Bo Odar has been involved in the script of all his films so far. That wasn't the case here. Worse still, for his Hollywood debut he had to make do with the remake of an average French thriller. The result makes it clear that Baran Bo Odar is an experienced filmmaker who can only really shine if he enjoys creative freedom. That wasn't the case here.

No question: "Sleepless" is a solid thriller. The movie looks good, the actors are - as far as the script allows - thoroughly convincing and the action is well staged. But especially when you think of the finesse with which an atmospherically dense thriller like "Das letzte Schweigen" was staged, it's just a pity how little of it can be felt here. A few days before the German cinema release, the trailer for "Dark", the first German NETFLIX series by Baran Bo Odar, was released. And the few seconds of this teaser radiated more atmosphere, excitement and originality than the entire 95 minutes of this routine thriller. It would be really exciting to see what a creative spirit like Odar could achieve with the means of Hollywood if he were left alone. But who knows - what's not may yet come.

In the 80s "Sleepless" would have been called good video store merchandise. This may sound a bit derogatory, but is actually meant to be relatively positive. Despite a few logical holes and stale clichés, the film offers its target audience entertaining entertainment. Yes, the film may not reinvent the wheel and fish in all too familiar waters. But you really can't blame him for being boring. Nevertheless, it's a pity that Baran Bo Odar, with a good actor like Jamie Foxx, an atmospheric location like Las Vegas and a story that is quite exciting at its core, can only show very little of what made his previous directorial work so special. So the bottom line is that there is only one: worth seeing with restrictions!