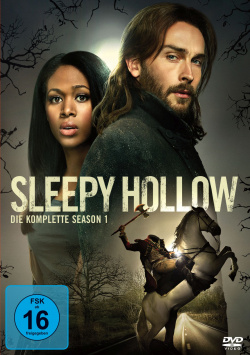 Film: Ichabod Crane (Tom Mison) is not badly surprised when he wakes up in a cave and finds out that more than 200 years have passed. The last thing he can remember is that he was ordered by President Washington to kill a mysterious horseman. Although he had shot him and beheaded him, the rider did not die. And even now, in 2014, the headless rider is still on the road, killing everyone who gets in his way. The young policewoman Abbie (Nicole Beharie), who had to watch her partner (Clancy Brown) being beheaded by the horseman's axe, joins Crane's fight after initial doubts. But soon the unequal duo has to realize that they are dealing with dark powers that could bring the beginning of the end of the world with them. But how can the first of the four riders of the Apocalypse be stopped? What do the two coven covens who once settled in Sleepy Hollow have to do with it? And was Ichabod's wife Katrina one of the witches? And what does Abbie's sister Jenny (Lyndie Greenwood) know, who flees from a psychiatric ward where she had been locked up since a traumatic experience in the sisters' youth?

The legend of "Sleepy Hollow" has already been interpreted several times. Based on an old West German folk tale of the headless horseman and the fifth Rübezahl legend from Johann Karl August Musäus' collection of folk tales of the Germans, it first appeared at the beginning of the 19th century in the form of a tale by Washington Irving. Back then, Ichabod Crane was a schoolmaster from Pennsylvania. In the reincarnation of Tim Burton, Crane then became a policeman - a role very similar to the one he now has in this modern series version. What is completely new about this interpretation is that Ichabod suddenly finds himself in the present and first has to make friends with the changes and technical innovations. This gives the series a humorous component, which is very pleasant in view of the otherwise rather gloomy basic tone.

Surely the series creators Phillip Iscove, Len Wiseman ("Underworld") as well as Alex Kurtzman and Robert Orci ("Fringe") didn't develop a really revolutionary series idea here. Her version of "Sleepy Hollow" fits perfectly to other supernatural mystery series like "Grimm" or "Supernatural". Dramaturgically, but also visually, there are no big surprises. And yet the whole thing works very well, offers exciting entertainment and can also score with a convincing investigator duo (Tom Mison & Nicole Beharie). The individual plot elements are constructed harmoniously and ensure that the tension level rises steadily throughout the first season, apart from a few small hangers. This is additionally supported by the dark atmosphere and some well done special effects.

Additionally, there are clear weaknesses in the dialogues in some moments and some side characters are drawn very clichéd. But against the many positive aspects of the first season, such weaknesses hardly carry any negative weight. For fans of fantastic mystery series "Sleepy Hollow" offers everything you can expect from this genre. And towards the end the story takes an extremely exciting course, so that you can hardly wait for the start of season 2 after the last episode. And for that the series is "absolutely worth seeing"!

Picture + sound: From a technical point of view the DVD offers exactly what you can expect from a current TV production: The colour scheme is extremely atmospheric, whereby the somewhat undercooled colours capture the oppressive mood of the story very well. The image sharpness is at a consistently good level. Although many things take place in the gloom, smaller details often also come into their own. The Dolby Digital 5.1 mix is also pleasantly atmospheric, with the voices sounding very directionally mixed. Ambient noises such as wind and the galloping of the horse from the headless rider or other small sound effects ensure that the surround channels also get something to do. Good!

Extras: Apart from an audio commentary on the pilot sequence on the first DVD, the remaining extras are all on the fourth disc. Also here an entertaining audio commentary makes the beginning, in this case the season finale. Furthermore there is an informative Making of with the title "Welcome to Sleepy Hollow" (ca. 19:53 min.), supplemented by "The Secrets of Sleepy Hollow" (ca. 18:31 min.). Some scenes are missing (ca. 11:50 min.), the nudes of the deceased Sheriff Corbin (ca. 2:31), as well as features about finding Ichabod Crane in the 21st century (ca. 2:51 min.), the horse trainer of the headless rider (ca. 2:50 min.), and about the head of the headless rider (ca. 2:07 min.). Some nice outtakes (approx. 2:30 min.) round off the good additional offer.

Result: "Sleepy Hollow" is a very successful reinterpretation of the legend about the headless rider. The idea of shifting the action into the present and turning it into a supernatural crime-mystery series works surprisingly well. Convincing actors, a dark basic atmosphere, here and there a bit of loosening up humor and exciting stories make the first season a very entertaining pleasure for all fans of series like "Grimm" or "Supernatural". The DVD presents the episodes of the first season in good picture and sound quality. And on the fourth DVD there are some very interesting extras about the background of the series and its creation. All this leads to the conclusion: Absolutely recommendable!