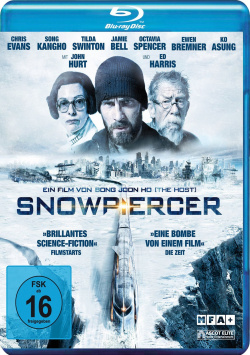 Film: In a not too distant future life on our earth is hardly possible anymore. Snow and ice cover the entire planet. In the icy temperatures, anyone who stays outside for just a few seconds dies. The only place where there is still life is a huge train that races around the globe. Inside, the social structures are clearly distributed. While the crowd in the back of the train is crammed together in eternal darkness, the few wealthy survivors in the front cars enjoy excessive luxury and decadence. But while the oppressed simply surrendered to their fate in the first few years, the signs now point to change. Under the leadership of the wise Gilliam (John Hurt), Curtis (Chris Evans) and Edgar (Jamie Bell) want to start a revolution that will finally enable Allen to live a just life in the train. But would long-term survival also be guaranteed?

With his first international production "Snowpiercer", Korean filmmaker Bong Joon-Ho ("The Host") delivers a particularly gloomy but also extremely original end-time vision. Even if there may be some set pieces that may seem familiar to connoisseurs of the genre of apocalyptic SciFi thrillers, there are still many moments and pictures that at least give the impression that one has not seen them like this before. The film is based on Jean-Marc Rochette's graphic novel "Schneekreuzer", but apart from the initial situation it sometimes deviates dramatically from the original. Especially towards the end, Bong Joon-Ho's version goes its own way, which makes the movie exciting and surprising even for those viewers who are familiar with the graphic novel.

"Snowpiercer" is a very dark, sometimes very brutal movie, which also has another side, which could be called a social satire. And this is the only real problem of the movie. For the figure depicted by Tilda Swinton, which is quasi representative of this aspect of the story, is a caricature that is too heavily overdrawn. And in the midst of the events characterized by suffering, despair and bloody revolution, this sometimes seems like a disturbing foreign body. Here Bong Joon-Ho would have had to show a bit more subtlety in order to achieve the effect he achieves in other parts of the movie. A good example is a scene in the front part of the train showing a teacher (Alison Pill) who is infiltrating the children of the wealthy train passengers with the propaganda of their leader. Also this sequence - and especially its ending - is exaggerated, but only in such a way that it still functions as a black humorous satire and doesn't degenerate into an exaggerated caricature like Swinton's character.

However, this is only a very small pothole on an otherwise great, in a disturbing way fascinating journey through a snowy apocalypse. With John Hurt, Ed Harris, Jamie Bell and a surprisingly edgy Chris "Captain America" Evans very well cast, "Snowpiercer" offers the perfect blend of outstandingly choreographed action, fascinating visual language, biting humor and a multi-layered story with some very surprising and clever set pieces. Even though not all visual effects are perfect and there are a few shorter lengths dramaturgically in the course of the two-hour runtime, it is precisely this very special mixture that almost completely buries these small weak points under itself. Because in the end the joy of finally seeing a movie that offers entertainment without offending the intellect prevails, and that is willing to put its courage to its own ideas before the ingratiation of mass taste.

Those who expect straight-lined high-gloss SciFi action will hardly want to follow this dystopian train ride to the terminus. But if you appreciate dark entertainment cinema that moves beyond the overly worn tracks and want to see something different than the usual Hollywood apocalypse, you should definitely get on the "Snowpiercer". Absolutely worth seeing!

Picture + sound: Technically, the Blu-ray is completely convincing. Although many scenes take place in the dark right at the beginning, the overall sharpness also lies in the presentation of details on a good to very good level. At the beginning the colouring is rather reduced, but in the second act it can score more points with a powerful and warm colour palette. The sound has some excellent surround effects to offer, especially in the battle sequences and the moments when the train thunders over icy tracks, which provide powerful life in the multi-channel area. But also the smaller sound effects, the music and the voices are well coordinated and create an absolutely satisfying sound backdrop. Good!

Fazit: "Snowpiercer" is a dark entertainment cinema that moves off the beaten track and finally offers something different than the usual Hollywood apocalypse. A brutal, cynical dystopia that can score with great actors and some very interesting visual ideas. The Blu-ray presents the film in very good picture and sound quality, the bonus material is worth seeing, but a bit too scarce overall. All in all, however, there is still one for it: absolutely recommended!