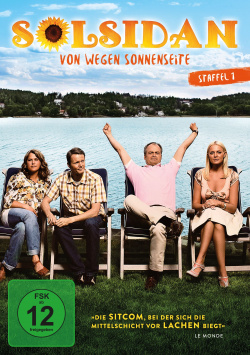 Content: Everything will be fine! Dentist Alex is convinced of this when he moves with his pregnant wife Anna to his parents' house in Solsidan near Stockholm. But already after a few minutes it becomes clear that the hoped for harmony was perhaps only a fallacy. Because Alex is more than surprised that his mother apparently doesn't intend to move out of the house as discussed. Now he has to kick his beloved mama out of her own house without pissing her off forever. And then there's his childhood friend Fredde, who never misses an opportunity to show Alex what a great life he leads. And Anna, too, can shoot a relaxed pregnancy into the wind when she finds herself confronted with her pushy mother-in-law and Freddes wife Mickan, whom she absolutely wants to persuade to do her daily fitness training. But maybe not everything is as bad as it seems?

"Solsidan" celebrated great success in Sweden with five series relays and a feature film between 2010 and 2017. Now the satirical view of life in a small congregation is coming to Germany. The humour of the series is rather reservedly staged and refrains from generating very big laughs. Rather, the only slight exaggeration of reality and the construction of absurd, yet quite lifelike situations create an amusing mood, which makes it a great pleasure for the audience when the apparent paradise is disenchanted.

Whether it's the mother-in-law who perfectly understands how to make her son feel guilty and thus drive his wife to despair, or the somewhat pushy neighbour, who constantly borrows something but is himself very stingy when it comes to his own property, or the bored housewives, who are outwardly friendly and buddy-like but manage to wrap insults in compliments - they all make it difficult for Anna and Alex to feel comfortable in Solsidan.

Follows like the one in which Alex and Fredde fight a very costly duel, which of them is the better host and cook, make clear in a very amusing way why "Solsidan" has been so successful in his home country. The series doesn't offer flat comedy, but very well observed, discreetly exaggerated everyday humor, which can be warmly recommended to friends of cryptic comedy with Nordic flair. Worth seeing!

Picture + sound: Picture and sound present themselves on the DVD in good TV quality. The overall sharpness is on a decent level and only here and there small weaknesses can be seen in the detail display. The colours are pleasantly powerful, underlining the idyllic character of Solsidan. The Dolby Digital 5.1 mix is rather unspectacular overall and is dominated by the centrally mixed sounding voices. For a TV series absolutely sufficient, for that there is one: Good.

Extras: As a bonus on the second DVD, there are a few promo clips that have been advertised as features and are no more than small advertising trailers for the series. The viewer is not offered any backgrounds, interviews or the like here. After about 5 minutes the bonus round is over again.

Fazit: "Solsidan" takes a delightfully satirical look at life in a supposed suburban idyll. The creators here are more interested in a consistently amusing mood than in a big laugh, which gives the series a certain charm - even if it sometimes hurts a bit how close the whole thing is to reality. The DVD of the first season presents the episodes in good picture and sound quality, but the extras are negligible. If you like profound comedy with a Nordic touch, you should definitely stop by  "Solsidan". Recommended