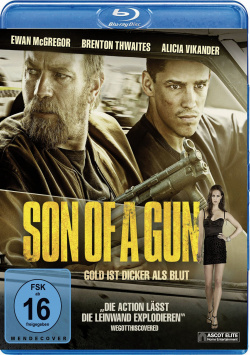 Film: When the nineteen-year-old JR (Brenton Thwaites) goes to prison for six months, he quickly learns that a guardian angel is urgently needed here in order not to be constantly beaten up or raped. Fortunately, the boy finds such a guardian angel in the mighty gangster Brandon Lynch (Ewan McGregor). But the protection from the other heavy boys is of course not in vain. In return, JR must help free Brandon from jail after his release. The spectacular outbreak attempt is indeed successful - but JR's guilt is far from over. Because he still has to support Brandon and his boys in a particularly lucrative raid. Too late he realizes that he has long since become a game ball in a dangerous cat-and-mouse game, where it's far more than just about money...

"Son of a Gun" begins like a tough jail thriller, which comes up with an oppressive atmosphere and some pretty hard moments. Even though it's hard at first to take Ewan McGregor off the tough gangster, the viewer is quickly drawn into the action. One can understand JR's fear and understand why he immediately gets involved in being protected by Brandon - even though he knows he will have to pay a high price for it. The dark prison atmosphere then gives way to the straightforward look of a classic Heist movie once JR has helped free Lynch from prison. Now not only the mood changes, but also the pacing of the film.

Director Julius Avery not only manages to put the two different parts of the story together harmoniously. He also knows very well how to build up a tense atmosphere, which can be unloaded again and again in very earthy, handmade action. As with his characters, he doesn't overdo anything, which gives the movie a very authentic feeling despite some small holes in the logic. And in it, Ewan McGregor, as a heavyweight drawn from life in prison, has an absolutely believable effect.

The romance between JR and the opaque Tasha (Alicia Vikander), which is incipient, Avery weaves harmoniously into the thriller plot. Sure, the movie would have worked without romance. But it gives JR a motive that makes his actions in the second half of the film more believable and makes Brandon an even bigger threat. The love story even helps to increase the movie's tension.

Surely, this Australian action thriller doesn't reinvent the wheel. The story looks familiar and some figures are already drawn in a very cliché-like way. What makes the movie so special, though, is that it's staged in the best sense of the word rather old-fashioned, yet at the same time it seems to be absolutely up-to-date when it comes to action. The good main actors, the slightly dirty look and the exciting story also contribute to the fact that this home cinema premiere has become absolutely worth seeing for friends of exciting gangster thrillers.

Extras: As a bonus there are some detailed promo interviews (about 90 min.) with the director and his actors as well as a proper look behind the scenes (about 29:13 min.), which consists of uncommented B-Roll material. Unfortunately there are no subtitle options for the extras.

Fazit: "Son of a Gun" is a gripping mixture of prison, gangster and action thriller, which can score with good leading actors, handmade action and an exciting story. The Blu-ray presents the film in good picture and sound quality. The bonus material offers a look behind the scenes and some very detailed promo interviews. Recommended!