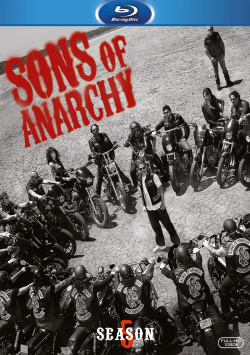 Content: The future of SAMCRO is on shaky ground. After Clay (Ron Pearlman) was shot down, Jax (Charlie Hunnam) took over the leadership of the club. That it was Opie of all people who shot Clay remains a mystery to the rest of the gang. But the tensions within the group increase, especially as Jax now also knows what role Clay took on in his father's death and he's plotting revenge. In this tense situation it comes more than inconvenient that the gangster Damon Pope (Harold Perrineau) starts a large-scale revenge campaign against the Sons of Anarchy, after his daughter was accidentally killed by Tig (Kim Coates). His thirst for retribution is not quenched even after the murder of Tig's daughter, and when some members of the gang are put to prison, Jax's leadership skills are put to a dramatic test.

Sheriff Eli Roosevelt (Rockmond Dunbar) also still pursues his goal of smashing SAMCRO. While he has so far been driven only by his professional honour, his struggle for law and order turns into a dangerous obsession after a tragic incident. So now the Sons don't just have to deal with a lot of threats from the outside, but also with ever deeper trenches within the group - a big, bloody confrontation seems inevitable...

The fifth season of "Sons of Anarchy" seems like a big breath of fresh air before the final spurt despite some very intense moments. Just two more seasons, then the story of SAMCRO is over. And series creator Kurt Sutter ("The Shield") knows very well in season 5 how to lay the foundation for the dramatic events that will come to the fans in the last episodes. This is already made clear by an extremely drastic scene in the third episode. The biggest change, however, is the intense finale of the season, in which Sutter pulls out all the stops and has decided to take a very radical but also extremely consequent step. And afterwards it's also clear that the series can't go on forever. That there was already a fixed endpoint here with season 7 and that everything that happens now prepares the way for the big finale.

Although there is still enough room in the series to introduce new characters. Besides gangster Damon Pope, who leads a bloody revenge field against SAMCRO, Jimmy Smits as pimp Nero and Gemma's new love affair is a really good addition to the series. In the middle of the season Donal Louge ("Gotham") joins the ensemble as former U.S. Marshall. However, his performances don't yet fit into the series and seem to serve primarily to prepare events that will take place in season 6. But that's not too bad, because Donal Louge is usually good and therefore always an enrichment for every series.

Jax` Transformation, which he experiences through his new responsibilities in the course of this season, as well as the tensions, which increase more and more within SAMCRO and also the confrontations with Damon Pope and his henchmen make these 13 episodes again absolutely worth seeing series food. A successful season with few lengths and some very strong emotional highlights, which definitely include episodes 3 and 13. But there is a very clear one: Absolutely worth seeing!!

Picture + Sound: Nothing has changed in the technical implementation compared to the fourth season. The picture of the new episodes is absolutely clean on Blu-ray and convinces with a very earthy, atmospheric colouring. The overall sharpness is also at a very good level, which is also reflected in a convincing presentation of smaller details. The vibrant DTS 5.1 mix brings out the dialogues clearly and powerfully, while some well implemented effects such as gunfire, explosions and, of course, the rattling of the motorcycles provide an excellent surround feeling again and again. And this is really very good for a TV series!

Extras: Also the fifth season has some good extras to offer again. So there are the usual audio commentaries by Kurt Sutter and his friends this time for the first and the eleventh episode. The episodes 2, 4, 6 and 13 are also available in extended versions. On each disc there are some additional edited scenes. The rest of the extras are on the third disc. Besides some outtakes (ca. 4:51 min.) and a short statement by Kurt Stutter about the creation of the series (ca. 3:41 min.), there is also a featurette about the character of Opie Winston (ca. 6:48 min.), as well as excerpts from a fan concert in the clubhouse (ca. 19:29 min.), where some happy fans could get very close to their idols. The bonus material is not quite as comprehensive as in the first seasons. For fans the extended episodes alone are absolutely worth seeing!

Fazit: "Sons of Anarchy" is approaching more and more the home straight. Only two seasons left, then the story of SAMCRO is over. That this unavoidable end is rung in, becomes clear at the latest with the end of this again very good 5th season. Although there are some somewhat tough subplots, the 13 episodes all in all offer extremely exciting, entertaining and in some moments extremely dramatic food. The Blu-ray continues to present the series in very good picture and sound quality. And fans also get their money's worth in the extras, even if they can't get close to the first squadrons in size anymore. But only the four extended episodes and the usual good audio commentaries console us about the lack of more detailed making-of featurettes. And so also for this season applies again: Absolutely recommendable!