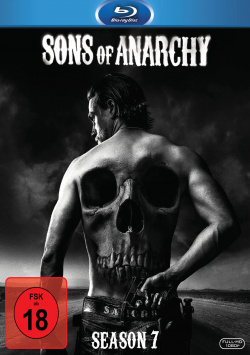 Content: ATTENTION SPOILER!!! Who hasn't seen season 6 yet should skip the next section!

After the brutal murder of his great love Tara there is only one goal for Jax (Charlie Hunnam): revenge! He has no idea that his mother Gemma (Katey Sagal) killed his wife. To save her own skin, she accuses a member of the gang of Lin, Tara and the Sheriff of having killed him. And immediately Jax sets a revenge plan in motion, which could soon expand to a bloody gang war, in which also the Aryan Brotherhood gets involved. The more blood flows, the more Jax seems to lose control and for the first time the future of SAMCRO is not under a good star. Because soon the Sons of Anarchy will not only have the police and the Chinese against them. But Jax understands perfectly how to form new alliances to bring his vendetta to an end. But what happens when he learns the truth?

With season 7 "Sons of Anarchy" comes to an exciting, bloody and very consistent end. Most storylines are completed - some with very emotional outcomes. You could blame the finals for being a little thick. And some elements of the last season may not quite do justice to the quality of the series. But that is whining at a high level. Even if the series runs out of breath towards the end, it remains extremely exciting and thrilling until the last second. The implementation is television at a very high level, with some of the recordings almost having cinema quality. The action sequences are again brilliantly and extremely relentlessly realized. And some moments hit the viewer with full force into the stomach area - just like you are used to from the Sons.

If there's any real criticism about this last season, it's Gemma. Too much time is devoted to her, creating unnecessary lengths and distracting the focus from the central story. Certainly Gemma is a central part of history and her fate is inevitably linked to that of Jax. Still, it wouldn't have taken as long to finish her story as it was spent here.

Beyond that the makers succeeded very well in giving the series some new, fresh impulses even on the home straight. With Althea Jarry (Annabeth Gish) a new Sheriff comes to Charming. She is a very strong woman who knows very well that she can only master the crime in her city if she works with SAMCRO, not against it - and that makes her very intense, which creates new, exciting conflicts. And Nero (Jimmy Smits) gets more and more between the fronts, which could almost cost him his life - or at least break him mentally.

This and many other aspects make the last season of "Sons of Anarchy" an absolutely worthy conclusion of a great series, despite some minor weaknesses. With interesting characters, a dramaturgy based on Shakespeare and some really outstanding moments of tension over seven seasons, the series offered entertainment on a very high level. And that's why there is also a clear thing for the swan song: Absolutely worth seeing!

Picture + sound: The technical implementation has not really changed compared to the previous season. The picture of the last episodes is absolutely clean on Blu-ray and convinces with a very earthy, atmospheric colouring. The overall sharpness is also at a very good level, which is also reflected in a convincing presentation of smaller details. The vibrant DTS 5.1 mix brings out the dialogues clearly and powerfully, while some well implemented effects such as gunfire, explosions and, of course, the rattling of the motorcycles provide an excellent surround feeling again and again. And that's really very good for a TV series!

Extras: The last season also has some good extras to offer. However, there are no audio comments this time, which is a pity especially at the finale. But the fourth disc has a feature that makes up for this shortcoming: The two-part documentary "Carpe Diem" takes 71:39 min. and takes a detailed and very informative look at the creation of the last season. Especially towards the end the whole thing becomes extremely emotional, which fans shouldn't miss at all. In addition to this excellent documentary, there are also edited scenes on Disc 1 (approx. 3:53 min.), Disc 2 (approx. 0:49 min.) and Disc 3 (approx. 1:03 min.), as well as amusing outtakes on Disc 4 (approx. 2:41 min.). This last disc also has some features about the legacy of the series (about 4:50 min.), the Mayhem motorcycles (about 5:11 min.) and the guest stars of the last season (about 7:02 min.). Last but not least, six tattoo stories reveal what the main characters' tattoos are all about (ca. 18:20 min.). Very good.

Fazit: "Sons of Anarchy" ends with 13 episodes of revenge. The individual storylines are consistently completed and the finale is also absolutely coherent. The last season isn't one of the best that the series has produced. There are too many lengths for that (especially the plot around Gemma was extended too much). But the way from Jax into the abyss is still extremely exciting and stirring until the end. The Blu-ray also presents the conclusion of the series in harmonious picture and sound quality. As a bonus there are no audio comments this time, but an excellent documentary (almost) in feature length, which fans shouldn't miss. That's clearly what it's all about: absolutely recommended!