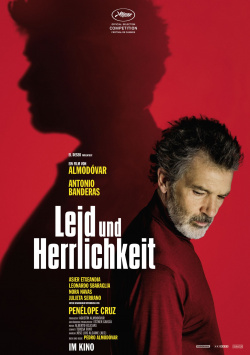 The great filmmaker Salvador Mallo (Antonio Banderas) once celebrated great successes. But an excessive life has left its mark. Marked by pain and loss, the director looks back on his life, on his special relationship with his mother (Penélope Cruz), on his first great, unfulfilled love and on his encounter with Federico (Leonardo Sbaraglia), which will change his life completely. To face all these memories is painful and Salvador threatens to break completely. But he also knows that he must face his past in order to be able to begin a new life…

"Leid und Herrlichkeit" is probably the most personal film by director Pedro Almodóvar, who repeatedly mixes autobiographical truth with fiction. In the drama of three formative epochs from the dazzling life, he tells of his quasi-age ego Salvador Mallo. The whole thing is supported by an excellent performance by Antonio Banderas, who delivers greatness especially as a man marked by suffering and drugs. The more one learns about the filmmaker's past, the more one can understand what causes this sadness, which can be seen above all in his gaze.

The episodic insights into the life of Salvador Mallo are sometimes moving, passionate, a little gloomy, but also cheerful and amusing. Almodovar shows very well how multifaceted a life can be and how formative some events and people are who meet us on our way of life. I have to admit, at the end of the movie, I was a little undecided. Yeah, I liked the movie. Very well in some moments, actually. But I must also confess that I was a little unsure what I was supposed to be told here. Some scenes seemed a little trivial, too slow to be really significant for the story, but in the end I decided not to pick up the film dramaturgically. Sure, that would certainly provide some new insights. But first and foremost it was important for me whether the film moved me emotionally and whether I was entertained well. And I can answer both questions with a clear conscience with "yes" - despite some lengths. "Leid und Herrlichkeit" has its weaknesses, but is a simply beautiful and well played drama. That's clearly what it's all about: Absolutely worth seeing!