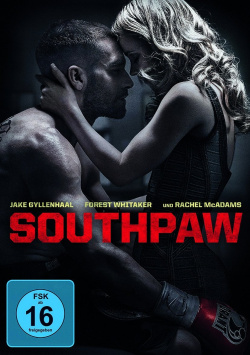 Film: Billy Hope (Jake Gyllenhaal) has literally pushed himself from the street to the top. Life never used to mean well for him. But with his wife Maureen (Rachel McAdams) at his side, he has managed to become the world champion in light heavyweight. It was a tough road, which not only physically hurt Billy badly. Now he has a lot of money and a happy little family. For Maureen the perfect time to get her Billy to hang up her boxing gloves. After all, she doesn't want to worry about him all the time and doesn't want her little daughter Leila (Oona Laurence) to have to watch her father get messed up by his opponents. The course has been set for a happy, quiet future: But then a tragic incident destroys everything and Billy is thrown back to the ground. And this time he has to fight his toughest opponent to date if he wants to make it to the top again: himself…

After the great success of the action thriller "The Equalizer" director Antoine Fuqua once again tries a dramatic subject with "Southpaw". Yet subtlety is not exactly the strength of his staging. The dramaturgy is filled with all imaginable clichés of athlete and especially boxer movies and the characters like the greedy manager or the ice-cold rival are drawn quite one-dimensionally. Also, Jake Gyllenhaal's very intense game is a bit too exaggerated at times to still look authentic. On the other hand, the boxer scenes are brilliantly realized and seem real in an almost painful way. And the story, as formulaic as it is drawn, is absolutely thrilling and gripping, especially in the second half.

This is not only due to the visual realization, but also to the great interplay of Jake Gyllenhaal and a really wonderful Forest Whitaker. Both of them manage perfectly to make the predictable dramaturgy exciting and to fill the sometimes very flat dialogues with a certain significance. Even though the story told here has already been told several times in a very similar form, the actors and Fuquas atmospheric staging manage to make the very conventional dramaturgy rousing and exciting. And even the finale, which now really corresponds to every conceivable cliché, is nevertheless extremely moving. To create something like this is a small masterstroke and testifies to the great talent of the director and his actors.

The physical transformation that Jake Gyllenhaal has accomplished for this film also has to be paid tribute to. He actually looks like a boxer who fought his way up from the gutter. Muscle-bound and with a certain courage for ugliness, he gives his character the credibility that is undermined by his sometimes too violent "Over-Acting". A good balance from which the film can also benefit. Praise also goes to Rachel McAdams, who can develop a really interesting and strong character in the short time she is seen in the film. If Maureen at the beginning seems like the typical pretty accessory at the hero's side, it soon becomes clear that she is the one who holds Billy's life together both professionally and privately and that she has to muster at least as much strength as her husband in the boxing ring.

"Southpaw" is not a perfect movie. But for what he wants to be, he is really great and thrilling cinema, which entertains well and in some moments really gets under your skin. Those who don't expect a revolutionary new story and can overlook some small weaknesses will be rewarded with a first-class boxer drama, which is worth every cent of the entrance fee just because of the very real fight scenes. Absolutely worth seeing!

Picture + sound: The picture of the DVD captivates by a high image sharpness, which lets also many smaller details come to the fore very well. The colouring is very atmospheric, dirt or other visible weaknesses are not recognizable. The sound shows its strengths especially in the fighting sequences. In addition to the easily understandable dialogues, the driving soundtrack and the sound effects during the intensive exchange of blows in the ring ensure powerful movement in the surround range. Good!

Extras: The DVD has a quite extensive mixture of English and German extras to offer. We start with almost 20 minutes of edited scenes, among which there are also some really worth seeing moments. Afterwards there are some German extras: A commercial Making of (ca. 10:02 min.), as well as featurettes about Jake Gyllenhaal (ca. 3:51 min.), his training for the movie (ca. 1:41 min.), about Rachel McAdams (ca. 3:48 min.), as well as about Marius Clarén, the German dubbing voice of Jake Gyllenhaal (ca. 3:40 min.). It's nice that the work of the dubbing actors is also appreciated here.

Besides these German-speaking extras, there are other English-language features that are offered without subtitles. Beside the trailer these are interviews with Jake Gyllenhaal (ca. 6:16 min.) and Rachel McAdams (ca. 6:01 min.). Buyers of the Blu-ray additionally get three more interviews and B-Roll recordings.

A photo gallery and a trailer show round off the overall quite extensive additional offer of the DVD.

Fazit: "Southpaw" may consist primarily of clichés and a quite predictable dramaturgy. Yet, this is extremely captivating and especially played so intensively by Jake Gyllenhaal that the viewer is not only captivated, but also entertained. The DVD presents the Boxer drama in good picture and sound quality and also has some worth seeing extras to offer. But there is a very clear one: Absolutely recommendable!