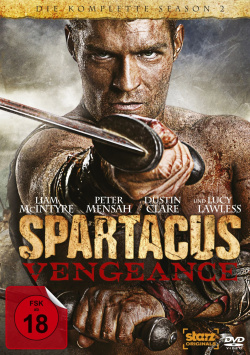 Content: Claudius Glaber (Craig Parker), who in the meantime has become Praetor in Rome and dreams of a great political career, is ordered back to Capua. There he shall hunt down the escaped gladiator Spartacus (Liam McIntyre) and his entourage. Since the bloody uprising in the house of Batiatus, the escaped slaves hide in the sewers under the city, but appear again and again to reduce the following of Rome in a brutal way. Glaber should now put a stop to the bloodshed. His pregnant wife Ilithyia (Viva Bianca) has to accompany him against her will. Since she could only barely escape the uprising, but has to answer for the death of Lucretia (Lucy Lawless) by closing the gates, she only wants to avoid Capua. She's all the more shocked when she meets Lucretia alive. Glaber now wants to use their survival and their supposedly visionary abilities to draw the people to his side and to turn them against Spartacus. He also has to struggle with the fact that the men around the Gaul Crixus (Manu Bennett) do not seem to follow the ideals of Spartacus and threaten to break the group of fugitives. Crixus is so far the only one who can prevent this. But when his search for his beloved Naevia (Cynthia Addai-Robinson) ends in a tragic message, Crixus seems to be untrustworthy anymore. Nevertheless Spartacus sticks to his promise: he wants to make the walls of Rome tremble and give freedom to all slaves who join him...

"Spartacus: Vengeance" follows directly the first season in content and style. Nevertheless, fans have to be prepared for a big change. Because after Andy Whitfield, leading actor of the first season, lost the fight against cancer far too early, Liam McIntyre had to take on the not exactly easy legacy. And even if McIntyre does his thing quite well, it still seems to be much less striking and robust than its predecessor. He also lacks the certain charisma that made Andy Whitfield a credible leader of the slave revolt. McIntyre on the other hand is mercilessly played against the wall by his co-stars like Manu Bennett or Peter Mensah. So it's not surprising that the title-giving Spartacus isn't the most interesting character of the series anymore.

Also the again very intriguing story isn't quite as engaging and surprising as it was in the first season. Even the prequel mini-series "Spartacus: Gods of the Arena", which was inserted between the first two seasons in the hope of a recovery by Andy Whitfield, couldn't really surprise the audience. With "Spartacus: Vengeance" this wear effect is even more significant. Nevertheless: these ten episodes also offer extremely good and worth seeing entertainment despite some small dramaturgical weaknesses. Here again, there is no ambition with sex, intrigues and extremely bloody violence. There are orgies in best "Caligula" style, brutal gladiator games and big fight scenes. Sometimes the depiction of violence was so drastic that two episodes had to be shortened for an 18 release. In addition to the shortened DVD and Blu-Ray versions, there is also an exclusive Blu-Ray version of the 2nd season, which is completely uncut.

But it's not necessarily the open-hearted portrayal of sex and the excessive blood fountains that make the series so appealing. Rather, it is the way in which those elements are woven into exciting stories that, once you get used to the somewhat artificial look of the series, are really gripping and entertaining. For the most part, the actors act in a wonderfully egocentric manner, appropriate to the events, whereby Lucy Lawless, Craig Parker, Viva Bianca and Peter Mensah leave a lasting impression. If you are looking for historical accuracy, you will certainly often be surprised or even angrily scratching your head. But if you are simply looking for exciting historical material and don't mind many naked bodies and drastic depictions of violence, this second season is for you too. Absolutely recommendable!

Picture + sound: The DVD presents the series in first-class technical quality. The very clean image also shows small details to their best advantage thanks to the extremely good sharpness. The colours are strong and the contrasts very well tuned. The sound is available in a good Dolby Digital 5.1 mix, which can convince with some very good surround effects, especially in the fights in the arena, and harmonious ambient noises. In addition, dialogues and music are well coordinated, which is why in the end there is also a deserved "very good" for the technical implementation.

Extras: On the fourth disc, this season again has some nice extras for fans of the series to offer. We start with two making ofs (approx. 11 + 5 min.), which give a brief overview of the emergence of this second season. Then producer and director Michael Hurst takes the audience behind the scenes (approx. 4 min.) and the new main actor Liam McIntyre lets himself be looked over the shoulder on set (approx. 6 min.). Featurettes about the effects (about 12 min.), about the legend of Spartacus (about 11 min.), as well as about the death of some characters (6 min.) are also included on the DVD. 3 minutes of amusing outtakes and a short trailer for the third and last season (approx. 0:31 min.) complete the additional offer. Good!

Fazit: "Spartacus: Vengeance" doesn't quite reach the quality of the first season "Spartacus: Blood & Sand" and in some moments looks much more trashy than in season 1 and the prequel "Gods of the Arena". Apart from that, the audience gets the usual mixture of blood, sex and intrigues, through which the series quickly gained a decent fan base. Even though the new Spartacus Liam McIntyre, who took over the role of the unfortunately deceased Andy Whitfield, doesn't quite reach his strength, this second season also leaves a very positive impression with its high fun and entertainment factor. For this there is a deserved one: Recommendable - whereby fans of course reach for the unabridged Blu-Ray version, because with the FSK 18 version (DVD and Blu-Ray) two episodes had to be shortened. Apart from that there is no reason to complain with this variant either, because of the good technical implementation and the worth seeing bonus material!