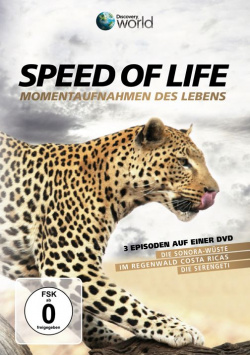 Film: Nature is full of beauty and fascinating secrets. Much of this, however, often remains hidden from the human eye. Because apart from the fact that they usually take place in very remote places on our planet, the very special snapshots of life often take place in a size or speed that we can hardly grasp. The filmmakers Philip Lott and Donald Schultz now give their viewers the unique opportunity to witness such special moments in the three-part series "Speed of Life".

With state-of-the-art technology, images were captured in extreme slow motion and great macro shots were taken, revealing very special facets of the wonders of our nature. The film was shot in the Sonora Desert (USA/Mexico), in the rainforest of Costa Rica and in the Serengeti. The spectator can observe a desert buzzard looking for food or experience the desert from the perspective of a turtle, on whose back shell a camera has been mounted. One learns that the sidewinder rattlesnake can survive in the desert because it can minimize contact with the hot sand by moving sideways. And a desert bird spider can be admired down to the smallest detail thanks to macro photography. Frogs, scorpions, monkeys, lizards or birds - they all show themselves from a very special side here.

Shots such as the emergence of a spider's web and the desperate struggle of the potential victims who get caught in it, or the lightning-fast attacks of snakes against their unsuspecting victims have a very special fascination in this form. But not only the macro shots and the extreme slow motion make these three parts of the documentary series worth seeing. Also the fact that the work of the camera team is thematized here makes "Speed of Life" extremely interesting. For example, it shows how the microscopic lenses are meticulously mounted on the cameras or how steel traverses are erected in the treetops of the rainforest of Costa Rica so that the cameras can follow shy animals at lofty heights. In such moments the viewer also gets an impression of how difficult the work of nature filmmakers can be.

Whoever has a weakness for special animal and nature shots, the three 45-minute films on the DVD offer a lot of fascinating, beautiful and impressive moments, for which there can ultimately only be one conclusion: Worth seeing!

Picture + sound: Thanks to the high-quality camera equipment used here, the picture has a very high picture sharpness, which reveals some wonderful details especially in the slow-motion sequences. The colour scheme is also very powerful and atmospheric, which ultimately leads to an all-round positive overall impression. The sound, on the other hand, is rather unspectacular, as the more centrally mixed Voice Over commentary sets the tone here. Some nice sound effects and the music make sure that the surround channels also get something to do every now and then. This is more than satisfactory for a documentary series. Good!

Extras: Unfortunately the DVD has no extras to offer.

Fazit: "Speed of Life" is a fascinating nature documentary, which presents shots with the help of the most modern camera technology and thereby captured slow-motion sequences, which otherwise can hardly be perceived with the naked eye. Whether in the Sonora Desert, the African Serengeti or in the rainforest of Costa Rica, what the filmmakers have captured here with their cameras should not be missed by lovers of nature and animal documentaries. The missing bonus material hardly has a negative impact. Recommended