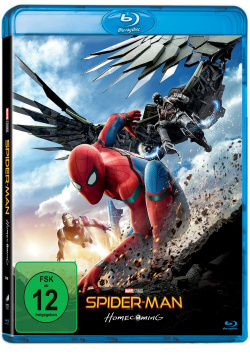 Film: After working in Berlin at the side of Iron Man (Robert Downey Jr.) fought Captain America (Chris Evans), Peter Parker alias Spider-Man (Tom Holland) licked blood. He now also wants to fight as Avenger against the really big bad guys. But Tony Stark has made it clear to him that he is far from ready. And so he must now continue to live his life between his school desk and the prevention of trifles such as bicycle thefts. But when he thwarts a bank robbery using a mysterious weapon, Peter sees his chance. He follows the heels of the crooks and comes across the mysterious Vulture (Michael Keaton), who doesn't like to be tampered with at all. And suddenly not only Peter is in great danger. And he has to ask himself if he's really ready to be a real superhero…

His short appearance in the last "Captain America" movie already hinted that this youngest Spider-Man would come closer to the popular comic hero than his predecessors. The fact that Tony Stark was introduced here as a mentor for Peter Parker also increased the anticipation of Spidy's new solo appearance. And since the last movies with Andrew Garfield in the leading role weren't really bad, but somehow seemed too overloaded and couldn't find their own tone, "Spider-Man: Homecoming" seems to have recognized and avoided all these shortcomings. The most positive thing first: The viewer isn't bored with another Origin story. Apart from a small scene in which Peter tells us that he was bitten by a radioactive spider, the background story is not dealt with further. Even his parents remain unmentioned.

Instead, director Jon Watts ("Cop Car") concentrates on a Peter Parker, who is torn between the normal school routine and his ambitions as a superhero. He is plagued by normal teenage worries, but he also wants to play in a league with the Avengers to help not only old ladies in his neighborhood, but the whole of humanity. This of course brings with it all sorts of hustle and bustle, difficulties and dangers. And that's exactly what Watts has done perfectly. His film is a harmonious blend of humour and action, high school comedy and fantasy bombs...

Tom Holland plays the spider man between awesome nervousness - especially in the presence of Tony Stark - and youthful overestimation of one's own self really perfectly. Throughout the film Peter Parker realizes more and more what he is capable of and where he has to learn a lot more before he is really ready to take on the responsibility that comes with being a superhero. All this is really what Tom Holland is all about, which is why he not only convinces as Peter Parker, but also as Spider-Man. And that's exactly where the weaknesses lay with his predecessors - as much as I liked Tobey Maguire as Spidy.

"Spider-Man: Homecoming" has realized that not only great special effects - and they are really great here - or a lot of action is necessary for a superhero movie to work well. Humor, a recognizable story and interesting characters are also part of it. Vulture, very well played by Michael Keaton, is a good opponent precisely because he is not interested in world domination, but because he pursues goals that you can understand as a spectator - even if, of course, you have to question his methods. And Peter Parker also has more facets than in previous incarnations, because behind the mask he is an insecure nerd with everyday worries and problems.

This movie is just fun. It is exciting, funny, rousing and entertaining. And also the scene in or the wonderful gag at the end of the credits underline the very positive overall impression. If you like superhero action with a self-deprecating wink and very likeable characters, you shouldn't miss this movie. Absolutely recommendable!

image + sound: The image is beautifully rendered. The sharpness of detail is at a very high level and a pleasant image depth is noticeable. The contrasts are harmoniously mixed and the colouring is pleasantly powerful. The German DTS 5.1 mix can keep up with this. Especially in the action scenes there is a lot of noise in the multichannel area. But not only the many sound effects, also the dialogues and the music are very well coordinated and sound powerful from the speakers. Very good.

Extras: The Blu-ray has around one hour of bonus material to offer. It starts with an amusing pop-up trivia track during es Films, which bears the name "Spidey for Dummies". If you watch the film again, you should switch on this function. We continue with a gag reel (ca. 2:17 min.), as well as some edited and extended scenes (ca. 16:17 min.), partly without finished special effects. Very amusing is the extended version of Peters Home Video from Berlin. How he enjoys German sweets like Maoam, Milka & Co. or how he learns that he saved a famous German politician is really funny to watch. Also worth seeing are the omitted moments of Peter's teacher Mr. Harrington, which were cut together here in a special way.

"A tangled net" (approx. 6:11 min.) shows how the film fits into the Marvel universe. The search for Spider-Man (ca. 8:04 min.) brings the casting to the fore, while the epilogue (ca. 4:47 min.) draws the bow to the battle of the Avengers for New York. Michael Keaton and his Vulture is the subject of another featurette (ca. 6:01 min.). And also director Jon Watts gets his own short documentary (ca. 5:29 min.).

Then Tom Holland and Jacob Batalon (Ned) discuss the advantages and disadvantages of being Spider-Man (about 3:28 min.). Further amusing instructional videos by Captain America (approx. 2:26 min.), trailer, insights into the PS4 game, as well as a photo gallery round off the good additional offer.

Fazit: "Spider-Man: Homecoming" integrates Peter Parker perfectly into the Marvel cinema universe. The film doesn't reinvent the genre, but it's just fun. He is exciting, funny, rousing and entertaining - and with Tom Holland he is really well cast. The Blu-ray is technically very well implemented. The bonus material is partly absolutely worth seeing and entertaining, but could have been a bit more extensive. The bottom line is very clear: Absolutely recommendable!