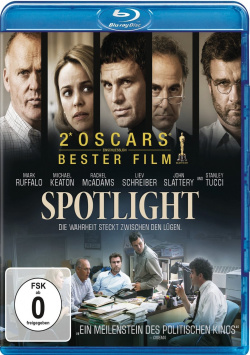 Film: Boston in 2001: Walter "Robby" Robinson (Michael Keaton), leader of the investigative team of the Boston Globe, is commissioned by his new boss Marty Baron (Liev Schreiber) to have his "Spotlight" team investigate alleged cases of child abuse within the Catholic Church. It is a problem that everyone actually knows exists, but which everyone has turned a blind eye to so far. As the journalists begin their research, an unexpectedly cruel truth quickly reveals itself to them. For the scandal is taking on ever larger dimensions than previously expected and does not only reach into the highest circles of the Church. Politics and the judiciary are also involved. And so the team has to deal with an enormously powerful opponent who does everything in his power to prevent this scandal from being made public…

"The Incorrupt" have found a worthy successor and this is called "Spotlight". The 1976 classic by Alan J. Pakula with Dustin Hoffmann and Robert Redford in the leading roles is regarded as the mother of all journalism thrillers, the quality of whose similar works must still be measured today. Few films of this genre have managed to really play in a league with the Watergate thriller. But the view into the editorial offices of Boston Global, based on true events, comes damn close. There are several reasons for this. On the one hand, of course, there's the great cast of actors that you simply love to watch. The scenes between Mark Ruffalo and Stanley Tucci alone are pure gold. But Michael Keaton, Rachel McAdams, Liev Schreiber and John Slattery also deliver first-class music here. The actors play the balls to each other with perfect timing, whereby nobody tries to play their way to the foreground.

That this interplay works out so well is also thanks to the direction of Tom McCarthy, who also co-wrote the script. After McCarthy with his last movie "Cobbler - The Shoemaker" with Adam Sandler was torn to pieces by critics and went swimming badly at the American box offices, he can rehabilitate himself with this outstanding work again. Because "Spotlight" reveals some very big strengths, especially when it comes to directing and scripting. The story the film tells is in itself extremely dark. It makes you angry and sad and confronts the audience with terrible truths. McCarthy succeeded in preventing two things perfectly in view of this very difficult starting position. On the one hand, he did not succumb to the temptation to let the film become a generalizing accusation against the entire Catholic Church. He knows how to differentiate in the important points and thus does not attack the faith itself, but only those who abuse it.

On the other hand, the script can counter the heaviness of the story with a pleasantly loosening lightness. This doesn't mean that the film wouldn't treat the subject matter appropriately, that it would be inappropriately humorous or even offer shallow entertainment. On the contrary. Nonetheless, clever dialogues, which also have a certain amount of humor, prevent the movie's basic tone from being too depressing. By creating such a high entertainment value, the very difficult and important topic is made accessible to a wider audience. And that's exactly what a film like "Spotlight" deserves credit for.

Whoever appreciates intelligent dramas about the significance of investigative journalism, who has a penchant for outstanding ensemble cinema and also likes to deal with controversial topics should not miss this award-winning work. Absolutely worth seeing!!

image + sound: The Blu-ray image presents itself in warm colors and has a good to very good overall sharpness. Here and there there there are minor weaknesses in the detail display, which occur especially in darker moments. But these do not really carry any negative weight. The Dolby Digital Surround 5.1 Mix lets the dialogues sound very powerful from the front. A few restrained sound effects and ambient noises repeatedly provide some movement in the surround range, which is convincingly filled with life. Good!

Extras: When it comes to bonus material, the Blu-ray is a little disappointing. The theme of the film offers so much potential for further extras, which is only marginally used here, though. Besides two short promo featurettes (2:29 min. + 3:14 min.) there is only one much too short "round table" with some real editors from the "Spotlight" team (approx. 6:33 min.). Although this feature is interesting, it can only scratch the surface during the short runtime. Too bad!

Fazit: "Spotlight" does the trick of conveying a difficult topic in a gripping and entertaining way without making it a trivial issue. Moreover, the drama is also a tribute to the importance of investigative journalism, which is far too rare today. A well played and intensively staged drama that presents itself on Blu-ray in good picture and sound quality. Only the bonus material is a bit disappointing. All in all, however, there is a clear one: absolutely recommendable!