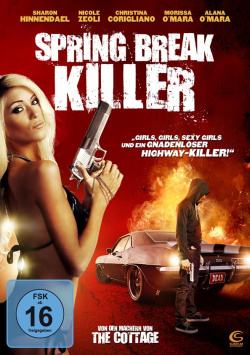 Film: Actually Rachel (Shannon Hinnedael) was looking forward to spending the Spring Break with her best friends Mila (Christina Corgliano) and Chloe (Nicole Zeoli) as every year. In a villa in Palm Springs, provided to them by a rich client of Rachel's father, the girls want to spend an exuberant party weekend with Rachel's boyfriend Shane (Robert Adamson) and his buddies. Too bad she has to take her younger sisters Sarah (Morissa O`Mara) and Nikki (Alana O`Mara) with her. Especially with the problematic Sarah, the girlfriends already get into a fight during the ride, which soon becomes a minor matter when the car of the five girls is followed by a strange car. Finally arriving at the secluded villa the girls feel safe - not knowing that a truly murderous weekend lies ahead of them...

"Spring Break Killer" is a quite well done low budget horror, which obviously makes use of other representatives of its genre, but at the end is not only entertaining because of the well done resolution. After an opening sequence that is strongly reminiscent of Wes Craven's "Scream", director Jim Valdez uses the thriller "Joy Ride" and numerous teen slashers for his cinema debut. The characters are drawn very stenciled, the conflicts between the characters are not very original and their behavior is often very illogical. The typical slasher ingredients blood and bare facts, are also used quite sparingly. However, the movie can score with an atmospheric location and some well-done moments of tension, which comfort you over some of the smaller weaknesses.

However, you shouldn't expect more than a decent average. The small budget, the still quite inexperienced director and the actors who aren't necessarily blessed with award-winning talent simply stand too much in the way of a positive overall impression. Moreover, the film suffers from the fact that the obvious borrowings from other works force direct comparisons to the role models. And Spring Break Killer just can't keep up with that. If Valdez had paid more attention to independence, if he had added more effective moments of tension and shortened some of the dialogue scenes, which were much too long in the middle part, his debut could have been a really good slasher.

However, that's just how the average horror thriller came into being, which implemented his plan to simply offer good genre entertainment in a proper way. If you don't expect more and can overlook some clichés, you can confidently go on a murderous weekend trip with the girls and be rewarded with a very nice ending. And so it's generally true: with a few exceptions it's still worth seeing!

Picture + sound: The fact that the film had to make do with a very small budget and was therefore shot with equipment that wasn't necessarily of the highest quality can be seen in the dark scenes. While the bright sequences can offer a powerful color scheme and a good to very good image sharpness, there are some obvious weaknesses in the dark moments such as slight image noise, small blurs and excessive contrasts. The sound doesn't offer any outstanding effect fireworks, but transports the dialogues powerfully from the home cinema speakers and also has some atmospheric surround moments to offer. This is perfectly sufficient for a low-budget production. Good!

Extras: As a bonus the DVD only has the trailer and further program tips to offer.

Fazit: "Spring Break Killer" is a low-budget horror thriller staged according to a familiar pattern, which however has some good moments of tension and a successful ending to offer. The acting performances are on average B-Movie level and the dramaturgy will certainly not win a prize for originality. But since the film doesn't want anything more than entertaining genre entertainment, the obvious weaknesses don't weigh so heavily that the entertainment value would be completely destroyed. Therefore the whole thing is not a big litter in the end, but it is enough for an entertaining 80 minutes. Recommended!