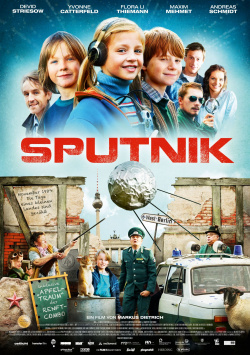 In autumn 1989, ten-year-old Rike (Flora Li Thiemann) from the Brandenburg village of Malkow had no idea of the political changes that would soon change life in the entire GDR. For Rike there is only one problem: her beloved uncle Mike (Jacob Matschenz) moved to the West from one day to the next and is there unreachable for the girl. But through her favourite series "Spaceship Interspace" Rike comes up with a brilliant idea: she wants to build a device with which she can beam Mike back home. Together with her friends Fabian (Finn Fiebig) and Jonathan (Luca Johannsen) she sets out to put her plan into action. And while their parents (Yvonne Catterfeld and Maxim Mehmet) are secretly preparing to flee to the West themselves, the children are not afraid of danger to get all the necessary parts for their machine. Even the always watchful people policeman Mauder (Devid Striesow) they can escape again and again. But when they are finally ready to start the beam experiment on November 9th, the events take a surprising turn…

With his feature film debut "Sputnik" Markus Dietrich tries his hand at a very ambitious project. It tells the story of German unity as an adventure film for children, which focuses less on humour for the target group than on drama, suspense and ingenuity. He actually does everything right: both the roles of the adults and especially those of the children are very well cast. The equipment is harmonious and affectionate. The rather discreetly used humor doesn't aim at the usual fart laughs, but is implemented a little more sophisticated. And the story itself has many very beautiful and original ideas.

The problem that could also be identified in the press screening, in which numerous children took part, is that the dramatic aspects of the story take up too much of the film. During the talks Rike's parents have about their planned escape, the little ones soon get bored. They want more adventure, a little more wit and speed. As an adult viewer you find the realization very well done and are convinced that you loved this movie as a child - after all, with a slightly transfigured memory you are convinced that you only watched demanding children's movies and never laughed at flat jokes. But then you look around and see a lot of increasingly restless children, whose laughter can hardly be heard and who fidget rather listlessly in the cinema chair, then you have to ask yourself the question, if "Sputnik" really is as successful a children's movie as you would like to believe it.

No question, Markus Dietrich has staged a very nice film, which has the heart in the right place and which has praiseworthy tried to challenge his young viewers by offering them a real story, which doesn't only consist of slapstick, fast cuts, great 3D roller coaster rides or a cool soundtrack. But unfortunately there is no particularly wide audience for such children's films, as far too few children are used to paying their full attention to a story for almost 90 minutes. Had Dietrich considered this a bit more, renounced some longer dialogue scenes and instead offered some more adventure and pacing, then "Sputnik" might have been a surprise success like Detlev Buck's "Hands off Mississippi". So the whole thing is well meant, but especially for hyperactive children rather conditionally worth seeing!