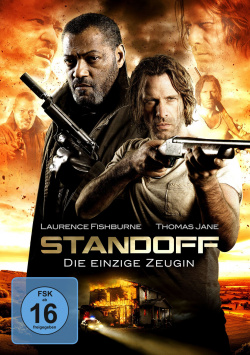 Standoff - The Only Witness - Blu-ray

Film: Since the death of his son, for whom he blames himself, former soldier Carter Greene (Thomas Jane) has completely withdrawn. Only with alcohol can he control his demons to some extent. But he no longer feels real courage for life. But then one day the twelve-year-old orphan girl Bird (Ella Ballentine9) appears at his door and asks him for help. When she visited her parents' grave, she had to watch a professional killer (Laurence Fishburne) kill some people in the cemetery. And now that she's seen his face, I want Bird dead too. And when the killer shows up, Carter is finally torn out of his lethargy. It's clear to him that he must protect the girl at all costs. And so begins a merciless duel, which the killer tries to conduct not only on a physical but also on a psychological level…

"Standoff - Die einzige Zeugin" starts promisingly. The scene in which Bird observes the murders in the cemetery gives hope for a thriller full of breathless suspense. Also the fact that the girl wants to get herself to safety with a completely broken man who has to break out of his trance in order to save Bird and herself has a lot of potential for tension. And first-time director Adam Alleca (among others screenwriter of the remake of "Last House on the Left") exploits this very well at the beginning. When the story turns into a chamber-play duel, it's Laurence Fishburne's hypothermic game that provides some really good moments.

However, unfortunately the script is not strong enough to get 90 exciting minutes out of this good starting situation. At some point, the dialogues are no longer a psychological cat-and-mouse game, but simply an empty banter that only brings the plot forward to a limited extent. The appearance of a young policeman, who is still being prepared quite extensively, turns out to be much too short and drives the tension curve up again, even for a short time. Only in the last few minutes does the whole thing pick up speed again and offer a predictable but nevertheless conciliatory finale.

"Standoff - Die einzige Zeugin" would have had potential for more, but is also such a solid little thriller with good tension moments. The middle section has too many lengths and weak dialogue duels to be able to convince all along the line. If you don't expect 90 minutes of breathless suspense, fast-paced action or wild shoot-outs and if you can overlook a few small pendants, you'll find good entertainment here. And for that there is also a satisfied one: Worth seeing!

image + sound: The Blu-Ray's image is absolutely clean and has a very good overall sharpness, which also brings out smaller details well in dark scenes. The colour scheme is very atmospheric, which underlines the slightly dirty look of the film. The DTS-HD 5.1 Mix ensures a pleasantly powerful movement on the surround channels, especially during the various shooting exchanges, but at the same time transports the many dialogues out of the speakers in a way that is easy to understand. Good.

Extras: As a bonus there is a short Making of (approx. 6:45 min.), as well as the trailer for the movie.

>Fazit: "Standoff - Die einzige Zeugin" is a thriller which is very exciting in parts, which has a high potential with its almost chamber play-like production and the good actors, but which is undermined by some lengths and clichés. But despite some weaknesses this two-man-thriller is well worth seeing. On the Blu-ray the film presents itself in good picture and sound quality and also has a short making of as an extra on board. Recommended!