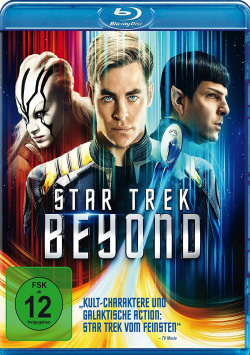 Film: The Enterprise and their crew have been exploring the galaxy deeper and deeper for three years now, exploring foreign worlds and forging new alliances. It was three exhausting, grueling years that made Captain Kirk (Chris Pine) doubt whether he was the right man for such missions. When they make a stopover on a Federation space station, Kirk is convinced that he wants to hand over his post to Spock (Zachary Quinto). But before that happens, Enterprise is called off to a risky rescue mission. Soon all other problems and doubts recede into the background, because the crew of the Enterprise has to deal with an enemy with such powerful weapons that not only the fate of the Enterprise but also that of the whole Federation seems to be sealed…

With "Star Trek Beyond" J.J. Abrams passes the baton to "Fast & Furious" director Justin Lin. After Abrams successfully revived the popular franchise, he said goodbye to "Star Wars" after two films and is now only active as a producer. Lin stays on Abrams' path, but also puts his own stamp on the whole thing, which is especially noticeable in the action sequences. For his debut in the world of Kirk, Spock and Co. he had a script at his disposal for which nobody less than Scotty alias Simon Pegg was responsible together with Doug Jung. The script is peppered with loving allusions to the classic series, but also spices up the story with a pleasant pinch of dry humor. For viewers who only know the new films, this can sometimes seem a bit exaggerated or even trashy. In contrast, die-hard fans will be delighted that the film - in keeping with the 50th anniversary of the franchise - has skilfully mixed the old with the new and thus become a very nice love letter to the entire "Star Trek" universe.

This has a high entertainment value, but also some weaknesses. Krall isn't a very good villian, especially as it almost amounts to an outrage that Idris Elba was made unrecognizable under a mask and his cool voice was completely alienated. It does pose a serious threat to our heroes, which also provides some good moments of tension. However, somehow it belongs to the aspects of the movie that you can forget the quickest. Dramaturgically, there are also some small lengths and such scenes, in which it becomes clear that Justin Lin can stage good action, but not necessarily powerful character moments.

What he did very well, however, is a nice bow to the great Leonard Nimoy, who made Spock the cult icon that this character is to this day. But it's not just this moment that makes fans feel a little lump in their throat. The fact that this film marks the last appearance of Anton Yelchin, who died far too early a few weeks ago, as Pavel Chekov is also a little melancholy. It's nice that Chekov's role is a little bigger than in the last two films. It's a worthy farewell performance of a really talented young actor who was torn out of life far too early.

Some very good effects, thrilling action sequences, nice allusions for fans and some really funny moments make "Star Trek Beyond" almost a direct hit - at least for fans of this new crew. Even though it is weaker in direct comparison to the first Abrams film and just on the level of "Star Trek Into Darkness", the positive aspects of this new adventure of the Enterprise crew are strong enough to make an overall very positive impression. And even though there are some clichés used towards the end, you already get a lot of desire for the next movie. This has already been confirmed and will once again play with the theme of time travel - so that Kirk's actually dead father, played by Chris Hemsworth, can also reappear. We are curious. But until then, it's "Star Trek Beyond" for now: A must for fans, worth seeing for all others with small compromises!

Picture + sound: The technical implementation of Blu-ray is undoubtedly at a very good level. The image has excellent sharpness, making even the smallest details visible. The depth of the image is impressive in many moments and transports the viewer from the sofa to the distant galaxies. The colour scheme and contrasts also contribute to the extremely positive overall impression. The same applies to the sound mix. Even if the German Dolby Digital 5.1 track doesn't seem as powerful as the English Dolby Atmos Mix, it has atmospheric ambient noise, a very good utilization of the surround channels, as well as a clear reproduction of the voices. There's a deserved one for that: Very good!

Fazit: "Star Trek Beyond" has its weaknesses, but is a successful love letter to the franchise, which celebrated its 50th birthday in 2016. Good effects, an exciting story and a little humor make this third adventure of the new crew around Chris Pine and Zachary Quinto an entertaining fun for fans. The Blu-ray convinces with good picture and sound quality. The extras are worth seeing, but could have gone a little deeper here and there. Altogether there is a very clear one: Absolutely recommendable!