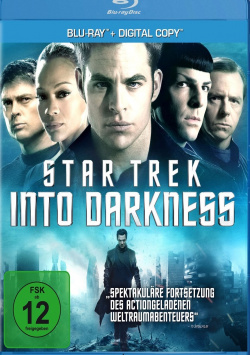 Film: Four long years after their last cinema appearance, the crew of the Enterprise are finally advancing into galaxies that no human has ever seen before. Under the renewed leadership of J.J. Abrams, who successfully ushered in the new "Star Trek" era in 2009, Chris Pine, Zachary Quinto and Co. will now prove a second time that they fill the oversized footsteps of their legendary predecessors with absolute dignity and conviction. And Abrams shows once again that it is quite possible to mix the spirit of the old series with contemporary action and state-of-the-art technology in such a way that old and new "Star Trek" fans are more than well served.

In "Star Trek Into Darkness" Captain James T. Kirk (Chris Pine) is confronted with considerable trouble after having violated all regulations to save the life of Spock (Zachary Quinto) during a mission on a primitive planet. Instead of showing gratitude, the Vulcan falls into his back and Kirk loses command of the Enterprise. Now he is to serve again as first officer under his former Captain Pike (Bruce Greenwood). But the rage over this punishment is soon completely pushed into the background when a cruel terrorist attack on a Starfleet facility takes place in London. Behind the attack is a man from his own ranks: the mysterious John Harrison (Benedict Cumberbatch) has only just begun his one-man war against Starfleet with the deadly explosion. After another attack that claims more victims, Harrison manages to escape to the home planet of the Klingons. Kirk gets the order to track down Harrison and kill him. It's a job he's all too happy to take on. But when we arrive at Kronos, the story takes a decisive turn...

It's extremely difficult to discuss "Star Trek Into Darkness" without revealing some of the secrets well kept by Abrams and his team or the many nice surprises. Without going into too much detail, it can be said that the future "Star Wars" director perfectly managed to stage a movie that you can enjoy without any previous knowledge (although you should have seen his first "Star Trek" movie already), but which at the same time also gives the loyal fans small, wonderful presents again and again. Those who know the original series and the first feature films will be able to enjoy this twelfth flight of the Enterprise over the cinema screens much more intensively than those viewers for whom Abrams' films are their maiden flight into the vastness of space. Nevertheless, "Star Trek Into Darkness" is not just a film for fans, but for all those who love outstanding SciFi adventures.

That's because Abrams doesn't just add allusions to the old adventures of Kirk and Co., but merely incorporates them into his very own mixture of action, humour and suspense. Here, too, he has attached great importance to the fact that his characters aren't crushed by the sometimes really breathtaking effects. Again and again he gives them enough space and wonderfully written scenes to develop themselves further and to grow close to the hearts of the audience. Here especially the good little hand that the makers have proven with the cast of the crew and the supporting characters pays off.

Chris Pine shows again that he is perfectly cast as a daredevil Kirk, who becomes a hot-blooded charmer at the sight of a beautiful woman (no matter what species), while he confronts his enemies with convincing hardness and stubborn determination. The fear of many fans that he can't do justice to this figure made an icon by William Shatner, he might have finally refuted with this second movie. And also Zachary Quinto leaves a very positive impression as Spock, which he can keep up convincingly in the quieter or more humorous scenes, but also in the action-heavy scenes. With Benedict Cumberbatch ("Sherlock") as their opponent, the creators have succeeded in making a very special coup. Because even though Cumberbatch doesn't look very threatening at first glance, he manages to become a more than convincing and believably dangerous villain through his extremely intense play, which makes the already very good movie even more interesting in terms of quality and show value. What Cumberbatch gets out of this role is just great and contributes a lot to the fact that this part is far superior to its successful predecessor.

Very nice is also the fact that despite all the action, explosions and fights the actually very peace-oriented basic idea of the series is taken up again in a very nice scene between Captain Kirk and Simon Pegg's wonderfully embodied chief engineer Scotty. Scotty becomes the mouthpiece for the series creator Gene Roddenberry, who has always seen a reconnaissance ship and no warship in the Enterprise. At the same time, this scene also illustrates the connection between old and new that J.J. Abrams has so successfully implemented.

"Star Trek Into Darkness" is a great entertainment cinema, just as it should be: an exciting story, adorable characters, a great villain, grandiose effects and several moments in which fans' hearts open. Surely not all old-established fans are satisfied with it. Nevertheless, J.J. Abrams must be attested that he has obviously made an effort not only to win new fans and pull the money out of the pockets of a target audience that is as young as possible, but also to make those viewers happy whose hearts have been attached to the "Star Trek" universe for years. And for this performance there is only one possible rating: absolutely worth seeing!!!

Picture + sound: There is nothing wrong with this disc from a technical point of view. The image is absolutely clean and has excellent detail sharpness. Colour mixing, contrasts and the matching of the black values also support the positive overall impression. This is also left behind by the 7.1 Dolby True-HD Mix sound, which makes the action-packed scenes crack and crack again and again. Even in quieter moments, the surround channels are used well, creating a very harmonious and lively sound backdrop. Very good!

Extras: When it comes to bonus material, Paramount really didn't stain itself with fame. It is not the case that the short documentaries, which together last almost 40 minutes, are bad. On the contrary. They all offer an entertaining and informative insight into the production. But not only these 6 features have been produced for home cinema evaluation. In total there are almost 2 hours of extras, plus an audio commentary by director J.J. Abrahams. However, many of these additional features have been made available to certain retail chains in the USA as exclusive content. Depending on where you buy your Blu-Ray, you will get additional documentation in the states. The audio commentary is only available via iTunes. There is no comprehensive edition worldwide that really includes all extras. Even the more expensive 3D set in Germany has only the 6 featurettes on 2 Blu-Rays and one DVD to offer - and that although on the cover behind the listing of the featurettes still another "and more" is written. This is really anything but customer-friendly and could rightly be declared as misinformation. A sad example of how little importance the studios attach to the wishes of the fans.

Fazit: "Star Trek Into Darkness" is a very entertaining, first-class entertainment cinema, which can not satisfy all hard-boiled STAR TREK fans, but which is very close to mastering this almost impossible task sovereign. Good actors, an exciting story and great effects make the second Star Trek movie by J.J. Abrams a great science fiction adventure, which can still entertain even at second or third viewing. The technically very well implemented 2D and 3D Blu-Ray releases only get a bland aftertaste from the bonus material. Although twelve features have been submitted to the FSK for age rating, only six of them are included on the discs. The fact that more bonus material than the 6 featurettes is announced on the expensive 3D version is an absolute impudence, as only these six short documentaries are included. So far the studio hasn't expressed an opinion on my request regarding the missing extras. Customer friendliness looks different. If you are interested in the film and don't care about the sales policy of the studio, this disc can still be warmly recommended!