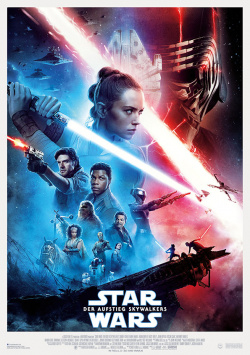 Now the time has come: After 42 years and nine movies, the Skywalker saga of the "Star Wars" universe is actually coming to an end. And since fans should experience this finale as spoiler-free as possible, we won't reveal much about the content at this point - especially since the film starts with the first big bang in the first 5 minutes. Just this much: The resistance is about to come to an end when the "First Order" receives unexpectedly powerful support. The last hope would be a direct attack on a secret base. But for this Rey (Daisy Ridley) and her friends have to search for an artifact that shows them the way to this hidden place…

J. J. Abrams, who had already successfully staged "Episode VII", took on a challenge that was difficult in many respects with "Star Wars: Episode IX - The Rise of Skywalker": On the one hand, he has to undo some decisions Rian Johnson had made in "The Last Jedi" to the displeasure of many fans and reconcile the disappointed fans. Moreover, he had to integrate new scenes with the unfortunately much too early deceased Carrie Fisher from edited material "Episode VII" into this last movie in such a way that it makes sense in terms of content on the one hand and gives the most popular princess of the galaxy a dignified farewell on the other hand. And last but not least, he had to bring together all the loose ends of the previous eight films into a coherent ending. Whew! </I can assure you, as a big "Star Wars" fan, that I won't say too much: J.J. did it! Sure, you will never be able to satisfy all the fans. And if you look at the first reviews, they are extremely mixed. Yeah, this movie is pure fan service. It's not perfect, but still I think that "Star Wars: Episode IX - The Rise of Skywalker" has become an absolutely worthy ending for a great cinema saga. One thing is clear: If you are looking for criticism, you will find it here. There are some inconsistencies (but they would be too big a spoiler to mention here). There are a few moments that seem to be very chaotic. And in fact, Abrams may be a little too thick here and there with the nostalgia brush. But honestly: If you are seriously bothered by this, you probably approached the film from the beginning with the attitude that no decent finale can come from Disney. And Abrams doesn't deserve this. You can just notice small details of his production that he himself loves the "Star Wars" universe and that he takes the audience seriously, who feel the same way. That he plays the entire fan keyboard once again at the end of the show should really not be blamed on him. </But everyone will feel differently now. For me, Abrams has delivered completely, especially considering the difficult tasks he had to face. It was clear that he would never be able to satisfy everyone and that after the harsh criticism of "The Last Jedi" and the financial failure of "Solo - A Star Wars Story" it was almost part of good manners to leave no good hair on "Star Wars". But I can only advise you not to get infected. Because then you'll miss the many little bows to over 40 years ago "Star Wars" and to the people who made this saga so wonderful, so unique and so successful. You will then miss out on the one really entertaining movie, which is far from perfect, but which has so many good moments, answers so many open questions and offers so many great visuals, that your fan's heart beats faster almost every minute.

No question, the "Star Wars" universe will accompany us in the cinema and on the streaming service Disney+ for many years to come. But the Skywalker saga is told to the end. In my eyes absolutely satisfying with a wonderful goosebump ending. Not groundbreaking and also not incredibly original. But still really, really good! And that's why I have the absolute best rating and a galactic one: Absolutely worth seeing!