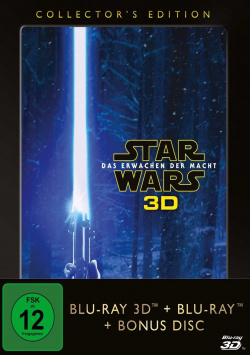 Film: In December 2015 it was finally time again: Fans of the "Star Wars" saga could finally travel back far, far away galaxy. Hardly any other film has been so eagerly awaited in recent years as "Star Wars: Episode VII - The Awakening of Power". Since the announcement that the actors from the original (and for many the only true) trilogy would play again and at the latest after the really great main trailer the anticipation knew no more borders. Although the marketing machinery of this movie has already taken on quite absurd traits and the "Star Wars" logo seems to have been smacked on everything, no matter if it has something to do with the movie or not, the enthusiasm of the fans was not affected. An income of over 2 billion dollars worldwide speaks for itself. Now the movie continues its triumphal march in home theaters and has been released in a Collectors Edition with 3D version and new extras after the standard edition.

Director J.J. Abrams ("Star Trek", "Lost") had made a big secret of the story to the end. And even if there is hardly anyone who hasn't seen the movie yet or already knows the big secrets, we don't want to say too much about the plot at this point. Because that would reduce the very special movie experience that this chapter of the "Star Wars" saga offers a little bit. But that can be said: Thirty years have passed since the rebel victory over the Empire. Luke Skywalker (Mark Hamill), the last of the Jedi Knights, has disappeared many years ago. In his absence, the "First Order" could rise from the ashes of the empire, with the aim of destroying the resistance once and for all. To prevent this, General Leia Organa (Carrie Fisher), the leader of the Resistance, desperately searches for her brother. She sends her best pilot Poe Dameron (Oscar Isaac) to the planet Jakku to provide important information about the Jedi Knight's stay. But before Poe can bring these important data back to Leia, he is captured by Kylo Ren (Adam Driver) and his storm troopers - but not without entrusting the information to the little droid BB-8, who shortly after falls into the hands of the loner Rey (Daisy Ridley). Together with the fugitive Finn (John Boyega), whom she believes to be a member of the resistance, Rey wants to bring BB-8 to the rebel base. And so the next chapter begins in the fight against the dark side of power…

J.J. Abrams is a big fan of the old "Star Wars" movies. That was also the reason why he did not want to do Episode VII at first. He did not want to destroy for himself the special position that these films have in his life. But luckily he let himself be persuaded, because Abrams managed to do what George Lucas unfortunately didn't succeed with his Prequel trilogy. In his quest to produce the technically perfect "Star Wars" film, Lucas had completely lost sight of the characters and everything that made up the charm of the original trilogy. Episode I - II are great entertainment cinema with great show values. But they are also very sterile, wooden films, which unfortunately take themselves far too seriously. This worked out especially well in some action sequences, but at other moments it also annoyed or even bored hardcore fans.

Abrams is now back to its roots. He has shot as often as possible on real locations and on real sets and has also worked a lot with animatronic dolls and masks. This makes this world tangible and doesn't give rise to the studio feeling that is inherent in many green-screen scenes from Episode I - III. That doesn't mean that Episode VII doesn't use a lot of CGI effects. But it is the mixture of traditional methods and modern technology that makes this return to the "Star Wars" universe so successful. The same applies to the characters and their actors. Here Abrams also makes use of a good mixture of old and new. While most of the well-known characters only have very small appearances, Han Solo alias Harrison Ford is one of the big stars of the movie. Ford brings this incredibly popular character to life with a lightness as if the three-decade pause had never happened. But he also gives Han Solo a few new facets. After all, the years have not passed him by without a trace. And one event in particular has had a lasting effect on him - which one, of course, will not be revealed here.

However, the new cast, led by Daisy Ridley, John Boyega, Oscar Isaac and Adam Driver, is also convincing in every respect. However, this is also due to the script, which makes her much more than just stereotyped clichés. Here another positive aspect of the staging comes to the fore: humour! Abrams and Lawrence Kasdan, who had already written the scripts for "The Empire Strikes Back" and "The Return of the Jedi Knights", lend their characters a humanity that Anakin, Padme or Qui-Gon Jinn simply lacked through extremely funny (but never flat) dialogues. These new characters are equal successors of Leia, Han and Luke and you are looking forward to spending even more time with these characters in the future.

Cynics and persistent grumblers could of course expose a lot of "The Awakening of the Force". Granted, there are a lot of parallels, especially to "Episode IV", so you could almost call the movie a remake. And yes, the makers play it safe dramaturgically and offer old and new fans exactly what they want to see. But what matters is how they do it. Here the film exudes a passion from every pore, which may perhaps be paired with calculation, but which allows the fans of the old films in particular to once again experience this very special feeling of wonder and amazement that one experienced as a child - or as an adult in the late 70s and early 80s in the cinema. J.J. Abrams brings back the magic that many of today's blockbusters simply lack. And you can only really be grateful to him for that.

Although "Star Wars: Episode VII - The Awakening of Power" isn't perfect and may not be the best part of the series, it has become exactly the movie fans were hoping for. It's a spectacle for the eye, extremely thrilling entertainment cinema with great effects, good actors, a new droid to fall in love with, a very interesting villain (about whom I deliberately said as little as possible), some very funny moments, but also some emotional goosebumps and a great new score by John Williams (even though it lacks a really catchy theme like in the earlier movies). Those who want to discover the child in themselves once more and who allow themselves to dive into foreign worlds and who can stop the unfortunately very present cynicism for two hours, will be offered a very, very big cinema here. That's what it's all about: Absolutely and definitely worth seeing!!!

>image + sound: Alarmingly flat coloring, distinct blur, artifacts, or blurred contrasts - you won't find any of that here. The Blu-ray presentation of the blockbuster is excellent to say the least. A razor-sharp image, a pleasant image depth and rich colors make the film a real pleasure in the home cinema - both in the 2D, as well as in the good 3D version. This is also ensured by the very well mixed sound, which not only scores well in the action-heavy scenes with a lot of surround feeling and powerful effects. Very good.

Extras: The bonus material of "Star Wars: Episode VII - The Awakening of Power" is not on the level of the "Lord of the Rings" Extended Editions, but offers fans a pleasantly comprehensive insight into the production. Let's start with the material already known from the 2D version: There is the excellent documentary "The secrets behind 'The Awakening of Power''" (approx. 69 min.). Four chapters deal in detail with the making of the film, from the sale of Lucasfilm to Disney to the engagement of director J.J. Abrams and the casting to the locations, the shooting or the construction of the huge sets. In addition to this documentation, some shorter featurettes go into more detail on individual aspects, which are only touched on here. So there is a nice, with four minutes much too short view on the first script reading with the old and new main actors, a nice short documentary about the practical effects and creatures (about 9:34 min.), as well as another one about the development of BB-8 (about 6:03 min.). The emergence of the lightsaber fight in the snow (approx. 7:02 min.) also gets its own feature, as well as the emergence of the visual effects in the ILM trick shop (approx. 7:55 min.). And the master John Williams, who composed a Star Wars score for the seventh time, should not be missing (ca. 6:51 min.). Six short edited scenes (approx. 4:15 min.) and information about the "Force for Change" project (approx. 3:22 min.) complete the already familiar additional Blu-ray offer.

New on board are more short edited scenes (approx. 2:24 min.), as well as very interesting featurettes about the noise makers (approx. 4:02 min.), the sound of the movie (approx. 7:15 min.), the look for the galaxy (approx. 6:27 min.) and about the weapons in the movie (approx. 8:17 min.). A conversation between Daisy Ridley and John Boyega (approx. 11:45 min.) as well as a very good audio commentary by director J.J. Abrams complete the new bonus material.

Fazit: Sure, there are some viewers and even fans who were complaining about "Star Wars: Episode VII - The Awakening of the Force". But overall, J.J. Abrams and his team have delivered exactly the movie that Star Wars fans had been waiting for and hoping for for many years. A successful start into a new trilogy, which presents itself on the 3D Collector`s Edition Blu-ray in outstanding picture and sound quality. On a bonus disc there are also some very worth seeing new extras and the already known bonus material of the 2D Blu-ray, which fans should not miss. An absolute must buy!