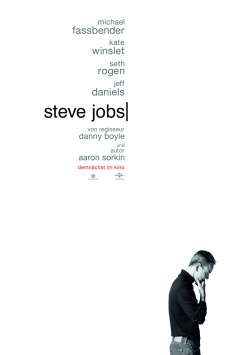 For many, Apple founder Steve Jobs was a visionary who changed the world forever. For others he was a tyrant in love with himself who drove the people around him and his colleagues mad. As always, the truth probably lies somewhere in between. There have been several books and films that have tried to approach the human being and the myth of Steve Jobs. Now Oscar-winner Danny Boyle dares to portray this controversial person with the means of cinema. However, he decided against staging a classic biopic. Rather, the screenplay by multiple award-winning author Aaron Sorkin focuses on three formative moments in the life and work of Jobs, which are presented in a kind of virtuosically conducted chamber play.

"Steve Jobs" observes the title character (Michael Fassbender) before the presentation of the Macintosh in 1984, NeXT during his Apple break in 1988, and iMac in 1998. The conversations Jobs has with people like his marketing boss and confidant Joanna Hoffman (Kate Winslet), the co-founder of Apple Steve Wozniak (Seth Rogen), his ex-lover Chrisann Brennan (Katherine Waterston) or his former mentor John Sculley (Jeff Daniels) in the heated minutes before the big gigs are pure fiction. But they should serve to capture the character of Steve Jobs, as well as his career and its significance. And the film succeeds in doing so excellently.

If you consider that over a running time of two hours there are only three scenes to be seen, in which actually only walking and talking takes place, Danny Boyle has succeeded in making an extremely thrilling and entertaining film, both from an aesthetic and dramaturgical point of view. The look changes from scene to scene, with a rather coarse-grained picture in the 84 sequence dominating the action, while the third scene - like the product presented there - is clearly superior to the technical one. Thus, technical progress is not only dramaturgically illustrated here, but also visually. Long tracking shots, which perfectly capture the hectic activity behind the scenes of such a product presentation, also make sure that the staging looks big and worthy of a cinema screen, despite the spatial restrictions.

However, the heart of the film is the great script, whose cleverness, bite and wit have also been very well translated into German. The dialogue duels that the protagonists deliver to each other here are extremely stirring and also work so well because the actors transport them from the paper to the canvas in a first-class manner. Every scene between Michael Fassbender and Kate Winslet is a real treat, Seth Rogen can show that he really can act and Jeff Daniels provides some of the strongest moments of the whole movie with his appearance. Admittedly, "Steve Jobs" may not be an entertainment film in the classic sense of the word, a work for a mass audience who are thirsting for speed not so much in dialogue as in the rest of the plot. But who appreciates first-class written actor cinema, gets here cineastischen high pleasure offered.

Mag be that one can accuse the film of inaccuracies with the representation of facts or of persons. It may also be that viewers who expected a more classic biopic are disappointed by this reduced dramaturgy. However, this doesn't change the fact that Danny Boyle has made a great film in terms of both craftsmanship and acting, which with its intelligent script can comfort all other points of criticism. Head cinema in the best sense of the word and therefore also: Absolutely worth seeing!