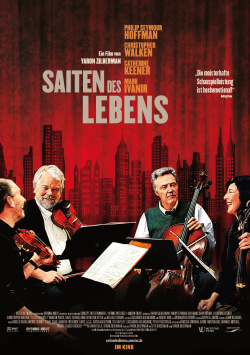 For 25 years the love of music has united the four musicians Peter (Christopher Walken), Daniel (Mark Ivanir), Juliette (Catherine Keener) and their husband Robert (Philip Seymour Hoffman). As the Fugue String Quartet they celebrate great successes, which can be attributed to the special harmony of their playing. But when cellist Peter receives the bad news that he has Parkinson's disease, the end of the quartet seems to be sealed. Because Robert sees the chance for a more drastic change as the first considerations about a successor for Peter are made. He also wants to get the chance to play first violin in the future, which Daniel doesn't like to hear at all. When Juliette also takes Daniel's side, Robert's frustrations unload in a fling with the attractive dancer Pilar (Liraz Charhi). And this then seems to be the last nail in the coffin of the career of the Fugue String Quartet…

"Strings of Life" is another film that addresses an Ü50 audience with an artistic theme. Director Yaron Zilberman has won a great cast for his feature film debut. As different as the performers and their playing may be, they harmonize great with each other, which makes them a perfect quartet in the truest sense of the word. Christopher Walken leaves a particularly lasting impression, although he has the comparatively smallest role to play in the ensemble, but plays it with a wonderful reserve and an enormously winning charm that one would like to believe that Peter's departure from the quartet could destroy the musical, but also the interpersonal harmony of the musicians.

"Strings of Life" is first and foremost a great actor's cinema embedded in very beautiful recordings of New York. Also dramaturgically, the movie is quite convincing, even though the story itself is completely unspectacular and not very original. The way it is transported by the performers makes it work really well. What the movie lacks, however, is a little humor. Here and there Zilberman breaks up the rather dramatic events with sensitive comedy pleasantly. But unfortunately such moments are rather scarce. The staging thus seems unnecessarily difficult and at times downright chilly, which is why it is also difficult for the viewer to feel real sympathy for the characters - except for Peter - and to develop interest in their fate.

Despite the beautiful moments and the great actors, the drama leaves behind a somewhat ambivalent feeling. On the one hand it is a lot of fun to watch the actors at work. Also the meaning of the played music is beautifully incorporated into the story. On the other hand, the film lacks warmth and real sympathizers who make the viewer wish that the Fugue String Quartets still has a common future after Peter's retirement. "Saiten des Lebens" is a quite nice movie overall, but it has too many rather trivial moments to be recommended unreservedly. For those who appreciate adult arthouse cinema of the quieter kind, the drama is still quite worth seeing, just because of the actors, despite its weaknesses.