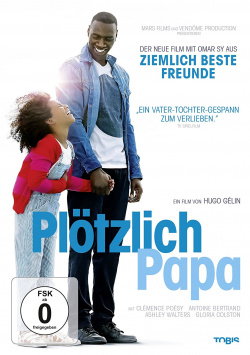 Film: Samuel (Omar Sy) enjoys his life as a single at the Côte d`Azur to the fullest. He drives tourists on their yachts and enjoys parties with beautiful women in the evening. The perfect life without obligations. But this ends from one day to the next when Kristin (Clémence Poésy), an affair from last year, suddenly puts a child in his arms, who is supposedly his daughter. Before Samuel understands what's happening, Kristin is gone. The search for her leads the bon vivant to London, where he remains stuck for the next few years. As a stuntman he can guarantee a pleasant life for himself and Gloria (Gloria Colston) and he uses every second to take care of the girl lovingly. For eight years the two lead an almost perfect life - until Kristin suddenly reappears…

With "Plötzlich Papa" director Hugo Gélin delivers a really enchanting father-daughter story, which lets the viewer experience the most different emotions. The remake of a successful Mexican comedy begins as easy fun in the style of movies like "3 Men and 1 Baby": A charming child's head is forced to assume responsibility for the first time in life. And that of course causes a lot of chaos during the first diaper change or the first bottle. But this part is quickly over and we observe eight years later a humorous father-daughter relationship full of joie de vivre and lightness. However, with Kristin's appearance the movie is replaced by a drama in the style of the classic "Kramer versus Kramer". But then the story takes another new direction.

Nothing should be revealed here, of course. Just this much: some tears will probably flow in the last minutes. Some of you may feel that the finale is a bit too thick. In principle, however, Gélin did everything right: he worked towards it, but can still surprise the audience. He does without too kitschy scenes and instead has the whole thing commented on from off screen. The interplay between the images that are shown and what you hear is really heartbreaking - but in all its sadness it has a certain beauty and a positive touch. And that's really a little trick.

The movie is far from perfect. Especially at the beginning there are some jokes that seem like excessive slapstick and too often you get the feeling that parts of the story are borrowed from other movies. And despite some appropriate criticisms, "Suddenly Papa" works really well. This is due to the direction as well as the wonderful leading actor duo Omar Sy and Gloria Colston. The "Ziemlich beste Freunde" star is once again an enormous popular figure whose charm you simply can't escape. And yet he is almost played against the wall by his no less charming film daughter. There is an almost perfect chemistry between the two, which ensures that they grow very close to the heart of the audience. One is happy for little Gloria that she has such a loving daddy and for Samuel that she gives his life a real meaning. It is this chemistry that comforts over the weaknesses of the production and especially makes the last third so stirring and emotional.

Whoever liked Omar Sy in "Pretty Best Friends" will love him here, too. The role of the loving Samuel, but also a little childish himself, seems to be written directly on his body. But also those who generally like a well-balanced mixture of comedy and drama and want to sob unrestrained in the cinema shouldn't miss this nice, entertaining movie. Absolutely worth seeing!

Picture + Sound: Warm colours, good overall sharpness and neatly balanced contrasts ensure that the DVD can make a good visual impression. The sound is rather restrained over long distances, whereby the soundtrack in particular provides some movement in the surround range. But every now and then there are also smaller sound effects and ambient noises that make good use of the multi-channel range. Good.

Extras: The bonus material consists of three areas: Extras in German language, Extras in French language without subtitles and Extras in French language with subtitles. Let's go with the German-language extras: Besides a Mini-Making of (about 4:10 min.) there are two short promo features about Omar Sy (about 3:02 min.), as well as about Omar Sy and Gloria Colston (about 2:34 min.). In addition there is a short clip from the premiere in Berlin (approx. 2:26 min.), the trailer and a picture gallery.

Without subtitles there will be B-Roll recordings (ca. 15:47 min.) and eight featurettes about the actors and their characters (ca. 24 min.), as well as the original trailer.

Fazit: "Suddenly Papa" starts as a comedy that turns into a moving family drama with a tearful ending. The cinema success is not only great played and entertaining with a lot of heart, it also causes many tears. The DVD presents the film in a very captivating picture and sound quality. The bonus material is extensive, but consists primarily of too often repetitive promotional material. Nevertheless there is a clear one: Recommended!