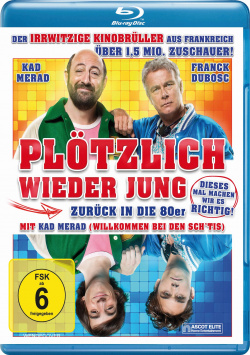 Suddenly young again - Back to the 80s - Blu-ray

Film: The married family man Patrice (Kad Merad) is a successful specialist for artificial insemination and bestselling author. His best friend Eric (Franck Dubosc), on the other hand, is a divorced womanizer who doesn't have much success with his sushi restaurant. But the fact that Patrice is also unhappy with his situation, because he only argues with his wife and is extremely annoyed by his pubescent daughter, surprises Eric. Patrice would much rather lead an independent life, as his best friend does. After a humid and cheerful evening in the country house of Patrice's parents, the two men actually have the unexpected chance of a new start. Because when they wake up, they find themselves in the bodies of their younger selves again in 1986 - the year of their Abitur and just before the moment when Patrice and his wife fell in love. After getting used to the unusual situation, the friends start the project again. But is another life really what they want?

"Suddenly young again - back to the 80s" really doesn't use any new ideas. This time jump comedy is therefore not really surprising in any way - perhaps apart from the fact that a cellar staircase serves as a time portal here. Not as original as a Delorian, but still kind of funny. But even if the wheel is not reinvented here and only familiar paths are followed, the whole thing works very well overall. Kad Merad and Franck Dubosc are a good duo who, with their newly won youth in combination with the experience of old age, reach the top of their comedic form. Especially amusing is a scene in which friends want to capitalize on their knowledge of the future by selling ideas for successful films as their own to a production company. Of course, Kad Merad's parade role in the "Scht´is" is not to be missed.

How the two first have to find their way around in the 80s undoubtedly provides the most amusing moments of the movie. From the moment when Patrice and Eric decide to give their lives a new direction and quasi take over the future of the other, there are more and more quiet moments, which don't always work, though. Some of these scenes seem more like filler material, which only brings the plot forward slowly and thus also leads to some lengths. The action, which was quite fast-paced until then, is slowed down again and again, which of course is at the expense of the entertainment value.

The humor is kept rather simple overall. Although the film pleasantly dispenses with overly flat brute humor, one searches in vain for subversive wit here. The potential offered by such a time travel comedy is only marginally exploited. However, since director Dominique Farrugia manages very well to wrap the story into a lovably ironic 80s charm, this flaw is more than well bearable. So "Suddenly young again - back to the 80s" may not have become the big hit, but the film always offers entertaining entertainment. Who likes French comedy food of the easy kind and for scarcely 100 minutes long without deep requirement can do, which will experience guaranteed a fun journey into the 80s. And then there is one thing that is quite clear: Worth seeing!

Picture + sound: The picture and sound quality of the Blu-ray corresponds exactly to what can be expected from a current production. The picture is absolutely clean, the bright 80s colour scheme is harmonious and the contrasts are also on a good level. The sound available as DTS HD MA 5.1 Mix, as usual for the comedy genre, does not ignite a big surround firework. But there is also always audible movement in the multi-channel range, which can create an overall very positive impression. Good!

>Fazit: "Plötzlich wieder jung - Zurück in die 80er" is an amusing time travel comedy, which can't take any new sides to the subject, but with a lot of 80s charm, a lot of self-irony and some very nice scenes it can comfort you over a few lengths and clichés. The audiovisual realization of the Blu-ray was absolutely successful, the bonus material, on the other hand, turned out to be very promolastic. But the interview with the main actors is amusing and worth seeing. Those who like French comedies of a somewhat lighter kind can confidently embark on this journey through time. Recommended