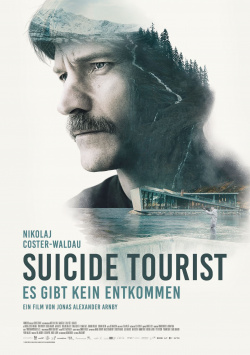 The tranquil life of insurance agent Max (Nikolaj Coster-Waldau) at the side of his wife Lærke (Tuva Novotny) is abruptly destroyed when he learns that he suffers from an incurable brain tumor. His attempts to take his own life fail miserably, however. The wife of a supposedly dead client makes contact with him. The only proof of his death is a video, recorded in Aurora Hotel - a luxury hotel that carries out planned and supervised suicides. Not least because of his personal situation, the hotel exerts a fascinating attraction on Max and he decides to go there and investigate his client's case. But once you have checked into the Aurora Hotel, there is no turning back.

"Suicide Tourist - There is no escape" tells a story that is really interesting at its core. Especially in the beginning, the concept of the hotel alone raises some interesting ethical questions. There are also scenes - for example one between Max and a younger guest of the Aurora Hotel - that really get to the heart. In his second feature film director Jonas Alexander Arnby succeeds in establishing a mysteriously gloomy atmosphere right from the start, which can unfold well in the sometimes a bit too dark pictures. And with Nikolaj Coster-Waldau a leading actor was found who, at the latest since "Game of Thrones", has also had international appeal.

In this respect Arnby has done many things right. Nevertheless, the film only succeeds to a limited extent in really captivating its audience. One reason for this is that Arnby misses to really deal with the topic "accompanied suicide". This so important aspect of the story remains too superficial, which denies the film a dramaturgical depth, but in a certain way also credibility. Instead, the staging loses itself in long takes and a nested narrative style, which at the beginning still has a certain appeal, but then becomes increasingly confusing. Surely, this reflects the state of mind of Max, who has to doubt more and more about what's happening around him. But unfortunately this is not really thrilling.

"Suicide Tourist - There is no escape" is unfortunately neither an explosive character study nor a gripping mystery thriller. Instead, Jonas Alexander Arnby's drama with its surreal elements lies somewhere in between. It has fascinating moments, but overall it falls far short of its potential - especially when it comes to dealing with the subject of euthanasia. If you liked Arnby's first novel "When Animals dream", you might also like this surreal mystery puzzle. But for everyone else: Only worth seeing with restrictions!