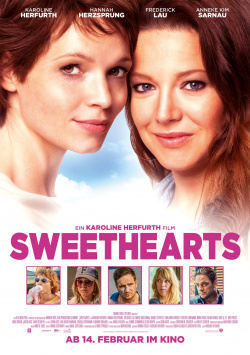 What a catastrophic day: First Franny (Karoline Herfurth) is sent on forced vacation because of her panic attacks. And then she's taken hostage on the way home. Because the actually perfectly cleverly devised plan of single mother Mel (Hannah Herzsprung), who wants to gain a better life for herself and her daughter by robbing diamonds, was mistaken because of an overzealous security officer. And now she's got a nervous wreck like Franny on her cheek. And she not only messes up the handover of the stones to a potential buyer, she also drives the toughness of Mel more and more to the brink of a nervous breakdown. And when the charming policeman Harry (Frederick Lau) by chance runs into both of them and becomes Mel's second hostage, the chaos is perfect…

"Sweethearts" is the latest directorial work by actress Karoline Herfurth after the successful romantic comedy "SMS für Dich". This time there is a little romance again, but only marginally. The focus is on two completely different women who, through a series of unfortunate coincidences, become partners in a turbulent history. There are some very funny ideas in it, which are especially expressed in sometimes very biting dialogues. However, this time Herfurth not only strains the laughing muscles of her audience, but also their nerves. Because especially at the beginning the events are very hysterical and it is really difficult to build up real sympathy for the main characters.

Anneke Kim Sarnau is really great as a SEK leader who shoots with her loose mouth even faster than with her gun. And also Frederick Lau, who already had some of the best laughs on his side in "SMS für Dich", can convince all along again. The chemistry between Lau and Herfurth is also very good, which makes the scenes between Franny and Harry absolutely well done. But that doesn't change the fact that the two main characters don't really want to succeed in hitting the right note. If the hysteria had just been turned down a bit in the first twenty minutes, the whole thing might have worked. So it's really hard to be entertained by the really amusing story without any worries.

If "Sweethearts" works, then it's really good. Then the comedy is so much fun that one is inclined to forget the weaknesses. But unfortunately they always recall themselves loudly, so that in the end not quite as a positive overall impression remains, as still with "SMS for you". Worth seeing is the whole thing already, but this time only with a few clear cutbacks.