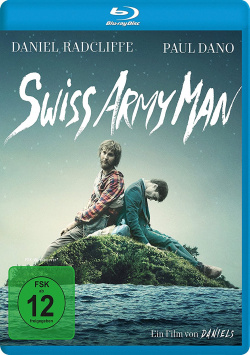 Film: Hank (Paul Dano), stranded on a desert island, has left any hope of rescue. But just when he wants to put an end to his life, a corpse (Daniel Radcliffe) is washed up on the shore of the island. Completely unexpectedly, Hank's bloated corpse becomes a salvation, for this undead version of a Swiss army knife helps him not only to get off the island, but also to survive the difficult path through the wilderness towards a saving civilization. Between Hank and corpse Manny, an unusual friendship develops on their common path beyond the boundaries of what is commonly known as common sense. But is Hank really crazy?

To start with: "Swiss Army Man" is a very special film. The humour and the very playful, bizarre visual language are truly not everyone's cup of tea. But even if you can't get used to this unusual mixture of comedy, drama, romance and fantasy, you have to admit that you've never seen anything like "Swiss Army Man" before - and about which movie can you say that nowadays? Works with such originality have become an absolute rarity that cannot be overestimated. Is that why you have to find the film so good? Of course not, but even if you think it's terrible and not funny at all, you should be glad that there are still movies that aren't completely mainstream, sequels, reboots or remakes.

Whoever can get involved with the special humor and the almost morbid fairy-tale-like narrative style will really get a very special movie here. Thus not only the scenes which give Manny his title make this weird work so special. Even though you might ask yourself what the makers smoked in order to come up with such really crazy ideas. But it is also the quieter, very imaginatively staged moments that give this Robinson variant its very special touch. Anyone who has the feeling that I'm a little on the ball here is right. But I don't want to go into these very special moments in more detail, because everyone should experience them completely unprepared for themselves. Because then this film is in any case a real experience!

The two actors transport the crazy story perfectly onto the screen. Above all, Daniel Radcliffe proves once again that he gives everything to free himself from his Harry Potter image. As a farting all-purpose corpse, he is allowed to deliver harsh slapstick interludes, but also a few somewhat profound moments - and he really does that with bravura. Therefore, if you always complain that there is nothing new to see in the cinema, if you have a penchant for quirky and artistic comedies and if you don't mind a little coarser, unadjusted humour, you shouldn't miss this film. Absolutely worth seeing!

Picture + sound: The Blu-ray image is pleasing with a very special color scheme, good image sharpness and coherent contrasts. The sound lives from the music, some very well implemented sound effects and the powerfully mixed dialogues. All in all, it can be said here that the special visual language and the very special sound design come into their own very well in home cinema!

Extras: The main movie is available with two additional audio tracks. In addition to an informative and very amusing audio commentary recorded by the two directors with their set designer Jason Kisvarday and sound mixer Brent Kiser, the film is also available without the music track. The Daniels give the reason for this in a wonderful intro: They want to show how important music is for the film and how bad it is without it. Great.

Fazit: "Swiss Army Man" is original, weird, evil, poetic, crazy and simply unique. Certainly not for everyone's taste, but if you can get involved with it, you will be rewarded with a wonderful mixture of brute comedy and playful drama. The Blu-ray presents the film in good picture and sound quality. The bonus material includes audio commentary, a look behind the scenes and a detailed Q&A about the sound. Altogether there is a clear one for this disc: Absolutely recommendable!