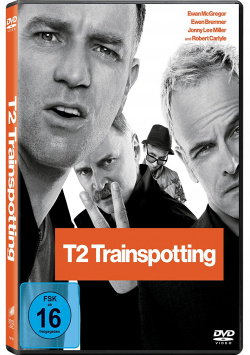 Film: Twenty years ago Mark Renton (Ewan McGregor) lost his buddies a lot of money and left for Amsterdam, where he built a new life for himself. It is now in ruins and he returns home. A lot has changed here, but a lot has remained the same. Spud (Ewen Bremner) is still hanging on the needle after a short touch of normality has collapsed only due to the change to summer time. Simon alias Sick Boy (Jonny Lee Miller) tries to keep his head above water by blackmailing well-off men with the help of his girlfriend Veronika (Anjela Nedyalkova). And Begbie (Robert Carlyle) is still in jail. Still, because just at the moment when Mark comes home, he manages to escape. And so it doesn't take long until the wild carousel of friendship, drugs, revenge, self-destruction and longing turns like crazy again - and it remains to be seen who will succeed this time…

With "T2 Trainspotting" Danny Boyle returns to his beginnings. In the twenty years that have passed since the first part, a lot has changed. The original has been copied countless times, but with its visual style and slogans it has been burnt into the collective memory of cineasts. The actors, especially Ewan McGregor, are no longer newcomers. And Boyle himself has developed artistically, even though he has always remained true to his core style. But our culture has also changed. "Trainspotting" worked so well because it hit the zeitgeist perfectly. To repeat this so perfectly is almost impossible.

And so it's hardly surprising that Danny Boyle didn't manage to create such a groundbreaking work with his sequel as he did 20 years ago. But he didn't mean it to be. Rather, he wanted to give all fans of the original the opportunity to indulge in nostalgia once again and at the same time tell the story of the characters from Part 1. "T2 Trainspotting" is therefore a good mixture of old and new. There are many allusions to the original and some direct quotes. On the other hand, it also becomes clear that no matter how much you might wish for it, you can neither stop time nor turn it back. It's a message spiced with light melancholy, which Boyle conveys here in an incredibly entertaining, funny and visually excellent way.

You can tell from the actors how much they enjoyed being allowed to slip into these characters again. Ewen Bremner and Robert Carlyle, but fortunately also Ewan McGregor and Jonny Lee Miller succeed very well in disappearing behind their roles, which raises the fun factor of "T2 Trainspotting" considerably. Of course, there are also some moments when your stomach turns around. Anyone who's seen Part One will know what's coming. You have to be prepared for this as well as for the fact that the wheel will not be reinvented here. But when the Danny Boyle of today meets the Danny Boyle of 1996, it results in something really exciting, incredibly funny and mercilessly good, which can confidently be described as a worthy successor to the cult film "Trainspotting". Absolutely worth seeing!

Picture + sound: As with the first part, the visual realization and the soundtrack play an important role in the film. Both are shown to advantage on the DVD. Boyle's pictorial language is implemented here with a harmonious colouring and a good overall sharpness. The soundtrack and sound design can unfold well in the powerful Dolby Digital 5.1 mix. That's the way it's supposed to be!

Extras: The bonus material starts with a good-humoured audio commentary by Danny Boyle and screenwriter John Hodge, who among other things talk about what it was like to visit the characters again after twenty years. Boyle also talks about this in a very interesting conversation with his main actors (approx. 23:49 min.). In addition, there are 29 (!) edited scenes (approx. 29 min.), which are often only very short moments, that the movie doesn't really miss. All in all, these edited scenes are also absolutely worth seeing.

Not mentioned on the cover is the short documentary "Calton Athlectic" (ca. 4:15 min.), which introduces real people, who seem to lead a similar life as the characters from the movie.

Fazit: "T2 Trainspotting" is a successful return to the cult film. Danny Boyle has succeeded in creating a good mixture of nostalgia and consistent continuation, which again scores with good actors and a very special aesthetic. The DVD convinces in audiovisual terms and also has some good extras on board. But there is a very clear one: Absolutely recommendable!