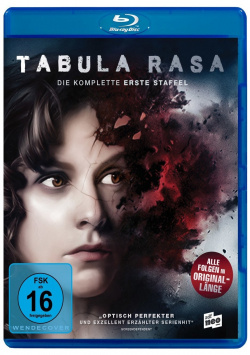 Content: Since a car accident the once successful dancer Annemie "Mie" D`Haeze (Veerle Baetens) has been suffering from a special form of amnesia: she can remember everything that happened before the accident. Since then, however, her brain has been unable to store new memories in her long-term memory. With the help of notes and the support of her husband Benoit (Stijn Van Opstal) she has managed to lead a quite normal life as a wife and mother. But then she is injured and found confused in the forest and ends up in a psychiatric ward. Apparently she is involved in the disappearance of a certain Thomas De Geest (Jeroen Perceval) and Inspector Jacques Wolkers (Gene Bervoets) wants to find out where the man is and how Mies is connected to him. But she just can't remember Thomas. Also her sketches and notes seem to disappear or to be changed. But Mie doesn't give up to prove her innocence: slowly she assembles the pieces of the puzzle and comes closer and closer to a cruel truth…

"Tabula Rasa" is an exciting thriller series that is based on an interesting premise: The only witness of a possible crime - or perhaps the perpetrator - can remember nothing and has to put together the pieces of the puzzle herself with small fragments of memory - never knowing whether the memories are reality or delusions. The fact that this premise also works throughout the entire season is due to some perfectly placed plot twists, of which at least two can't be seen coming even as a series and cinema junkie. Through these surprising - and at least in one case really shocking - twists the story is always steered in a new direction, which leads to the fact that despite a very slow narrative style the action remains gripping until the end.

There are some storylines that don't work quite so well and seem to be a bit artificial. But all in all, as a viewer you get some thrilling entertainment, which isn't only implemented visually great, but is also played first class. Veerle Baetens, who was also involved in the conception of the series, plays Mie, who constantly balances on the edge of madness, really brilliantly. She is disturbed, frightened, but also determined to find out for herself what happened to her. Thanks to the intense play of Baetens, even some scenes that are a bit far-fetched in themselves seem believable and stirring.

If you like thrilling psycho-thrillers, if you can do without a fast pacing and if you want to get some really good surprises and good actors, you shouldn't miss "Tabula Rasa". My only tip: Don't read anything beforehand so that you will be really surprised by the plot turns. Only then can this successful Belgian production develop its full potential. Absolutely recommendable!

Picture + sound: With its authentic, slightly subcooled color scheme, the Blu-ray image well underscores the dark atmosphere of the series. Especially in those scenes in which it is (at first) unclear whether they are real or a delusion of Mie, this comes into its own very well. The pleasantly high picture sharpness and the detail display also leave a good impression in the darker scenes. The dialogue and the restrained soundtrack predominate in the sound, but every now and then smaller sound effects also make sure that not only the tension increases, but also that there is some movement in the multi-channel area. Good.

Extras: Unfortunately the Blu-ray set does not offer bonus material. Only a booklet with an episode guide is included in the box. ATTENTION: Don't read through the episodes before watching them, because two of the most important plot twists are already revealed here!

>Fazit: "Tabula Rasa" is an exciting thriller series, which can convince with a really surprising turn of action, a great leading actress and a visually engaging staging - even if some small plot elements don't work so well and the narrative tempo is sometimes very slow. The Blu-ray presents the episodes of this first (and hopefully not the only) season in good picture and sound quality. However, interested viewers have to do without bonus material. Still, it's clearly one thing here: absolutely recommended!