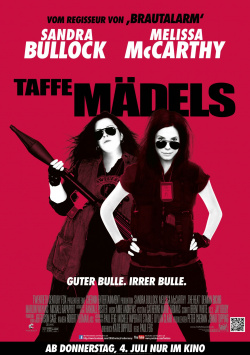 An excellent success rate and an almost unnatural commitment to her job make FBI agent Sarah Ashburn (Sandra Bullock) hope that the long-awaited promotion will soon be coming. But instead of promoting her, her boss (Demian Bichir) sends her to Boston, where Sarah, who is hated by her colleagues, has to prove her genius one last time. Cause there's a powerful drug lord going about his business the FBI doesn't even know what he looks like. But in order to identify the villain and smash his ring, Sarah has to work with the coarse policewoman Shannon Mullins (Melissa McCarthy). The women, who couldn't be more opposite, are constantly clashing at the beginning, which doesn't even rule out fisticuffs. But when the investigation also hits Shannon's personal environment, the constantly swearing policewoman and the over-correct FBI agent grow together and show the Boston underworld what Taffe girls are capable of&.hellip;

After the great success of his comedy "Brautalarm" director Paul Feig again puts a few "Taffe Girls" in the center of the action in his latest film. After Melissa McCarthy has become the secret star of "Brautalarm" with her supporting role as Proll-Brautjungfer, this time Feig has promoted her to the leading actress without further ado. At the side of Sandra Bullock, whose character evokes memories of her hit movie "Miss Undercover" right at the beginning, McCarthy can again ignore any form of good behaviour. That's very funny in itself. But the problem is that she seems to be subscribed to very similar roles ("Voll abgezockt", "Hangover 3", "Immer Ärger mit 40") since "Brautalarm". And so her portrayal just seems like another variation, which lacks every element of surprise and a certain freshness, which surely would have done this comedy good.

Sicherlich, the impact of the completely opposite characters, who embody Bullock and McCarthy, makes for some very funny moments. Nevertheless, Paul Feig doesn't manage to build up a consistently high entertainment factor, as the scenes that are really fun are almost completely replaced by very flat gags, smaller moments of foreign shame and above all by unnecessarily lengthened sequences. It's especially unfortunate that some scenes start out really good and funny, but then get ridden to death in such a way that they just get on their nerves at the end.

That the movie works out quite well in the end, is not only due to the few good laughs but also to the good chemistry of the charming main actresses, on which Feig can build some very amusing moments. Also, the fact that set pieces of the classic Buddy-Cop Movies are presented in a female version, which leads to a really wonderful punch line especially when interrogating a suspect, gives the comedy a certain charm, from which even the weaker moments can profit.

Thus, the well done and the less funny scenes are more or less balanced. "Taffe Girls" could have been a lot better, but also a lot weaker. A nice, sometimes a bit silly comedy with sympathetic leading actresses, who can lead lovers of a bit simpler knitted US comedies to their minds. For all of you who missed shooting in "Bridal Alarm", it's worth seeing!