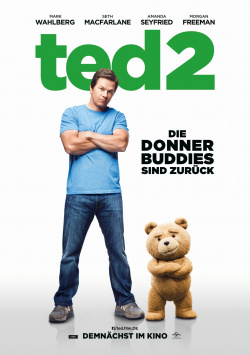 Cuddly as hell: Teddy bear Ted, who came to life years ago, with his loose mouth and his preference for light girls, alcohol and everything that can be smoked, is not necessarily the ideal of a children's toy. Nevertheless, the state of Massachusetts does not want to recognize him as a person, but still sees an object in him. What an insolence! Ted wanted to adopt a baby in order to solve his marriage problems with Tami-Lynn (Jessica Barth). With the help of his "Donnerbuddy" John (Mark Wahlberg) Ted now wants to sue the state and finally be recognized as a person. The friends get support from the young lawyer Samantha L. Jackson (Amanda Seyfried), who has qualified herself for the job just because she likes to smoke as much as her fluffy client. Nevertheless, they lose in court and it almost seems that Ted has to come to terms with never being more than a talking toy. But there's one last hope - and so Ted, John and Samantha start on a crazy road trip to New York...

As "Family Guy"- and "American Dad".-In 2002, when the creator Seth MacFarlane unleashed the swearing, smoking and in every respect politically incorrect teddy bear "Ted" on the public, the world's cinemas were flooded with over 500 million dollars - more than ten times his production costs. A continuation was there naturally fast decided thing. With "Ted 2" this success should be even surpassed. More bad jokes, more prominent guest appearances, even more allusions to the nerd culture of the 80s and even more action are to make sure of that. However, the concept only works to a limited extent. Because in some moments it becomes very clear that sometimes more is just too much of a good thing, as was the case with MacFarlane's western comedy "A Million Ways to die in the West". This is true for the end of Ted's and John's visit to a fertility clinic, for example, but also for some of the slippery sayings, which don't get any more funny through the use of various power expressions.

On the other hand, the movie works especially well when it gets really evil and more or less hides satirically the hypocrisy of the Americans about gun laws or the tense political correctness. Especially funny is the visit to an improvisation theater, where Ted and John want to get the actors out of concept with particularly spicy suggestions. But also in other scenes surprisingly biting depths hide themselves between the obscene absurdities again and again, which lose however by the somewhat overused Sexwitzchen clearly at effect.

What works against it really well, are the many self-ironic guest appearances. Whether it's the former US late night king Jay Leno, the veteran Liam Neeson (whose cameo will be continued after the credits) or Michael Dorn, who takes his role from "Star Trek: Next Generation" to heart's content, they all make for really good laughs with their performances. And Amanda Seyfried as a pop culture dyslexic who has never seen a film with Samuel L. Jackson, "Rocky" doesn't know or doesn't know who Gollum is - which leads to a really funny encounter at the New York ComicCon - is a more than adequate substitute for Mila Kunis.

The movie is filled with very clear side blows and small allusions (if you take a close look at a wrangling at ComicCon, for example, you will also discover an arch-enemy of Peter Griffin from "Family Guy" among the costumed ones), which keeps the fun factor of the movie high even in its weaker moments. No question about it: the sequel has not become as good as Part 1. There are too many lengths for that and the end, which is brimming with pathos and is certainly meant to be ironic, only works to a limited extent. Nevertheless, the second screen appearance of the rude, yet somehow loveable Teddy's is also a big pleasure for all fans of his predecessor with lots of really good laughs. Therefore, whoever loved the first "Ted" will at least like the sequel. And in the end there is also a satisfied one: Worth seeing!!