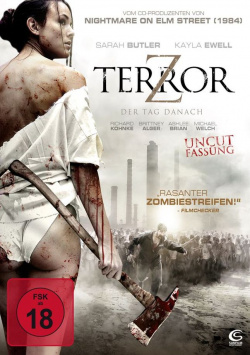 Terror Z - The day after - DVD

Content: The semester is over! A good reason for Taylor (Kayla Ewell) together with her boyfriend David (Richard Kohnke) and the friendly couple Brice (Ashlee Brian) and Naomi (Brittney Alger) to drive to the pretty summer house of Howard's (Michael Welch) rich parents, where he and his girlfriend Sharley (Sarah Butler) are already waiting for them. It's just supposed to be a relaxed party weekend. And although there are small tensions between some of them, the plan seems to work. But then she gets a scary message: terrorists are about to attack the Gulf Coast. They say rockets are already on their way. Unfortunately, this horror message proves to be reality and one of the missiles hits just near the summer house. As a result, people in the area are infected with a virus that turns them into murderous zombies. For the six college friends, if they want to survive, they must make it to a rally point on the roof of the university, from where the military would bring them to safety. But they first have to get there...

"Terror Z - The Day After" begins as if director Christopher Rosevelt had copied the dramaturgical structure directly from the horror film handbook. Six joy, all very stereotypically drawn, meet for a weekend in a somewhat secluded place where, despite a certain luxury, there is of course no mobile phone reception and no television. The tensions that arise in this clique seem very constructed and not very original. But as soon as the horror breaks over the protagonist, the entertainment value also increases significantly. Even though Rosevelt doesn't deliver any dramaturgical masterpieces and some of the effects are rather poor due to the small budget, he still manages to build up a really good tension.

That he succeeds by trying to win a new side to the currently overused zombie genre. Apart from the fact that, strictly speaking, his zombies are more likely to be called infected because they are not undead, Rosevelt gives them a very interesting quality: they stand motionless in the area until they hear a sound. Only then do they turn into extremely fast and dangerous beasts. On their way to the saving roof of the university, the friends have to manoeuvre as silently as possible through infected persons, some of whom are very close together - and that really holds a very high potential for tension in itself.

The violence itself usually takes place outside the picture. One could now think that a zombie strip without liter of blood and masses of intestines does not work. But also this decision proves to be absolutely successful, especially in one scene, as Sharley's face, which is marked by fear and guilt, and the soundscape alone convey more horror than the not really convincing gore effects could have done.

"Terror Z - The day after" is certainly far from being a masterpiece. The first twenty minutes in particular are simply too poor for that. But just the attempt to win some new sides from the genre and not to rely only on striking gore effects make the second half of the movie really worth seeing. At least until the end, when Rosevelt apparently didn't know which resolution to choose. The path he has chosen is simply confusing and does not work with the best will in the world. Nevertheless, there is still a good one at the bottom line: Worth seeing!

Picture + sound: Sure, the film looks and sounds like a typical low budget home cinema premiere and is of the technical quality rather in the good midfield. But the picture of the DVD shows a good overall sharpness, in which especially in the brighter moments the smaller details are also reproduced well. The colors seem somewhat artificial, as they are very powerful at the beginning and are then noticeably reduced as soon as the horror really breaks out. But it's full of atmosphere. The sound is okay, but the dialogues sound much more central in the German version than in the English version. But at least there are also some well mixed sound effects, which bring some movement into the surround sound scene, especially in the last third. Good!

Extras: In addition to the trailer for the film and other program tips from the provider, the DVD also provides a brief look behind the scenes (15:37 min.).) in the English original without subtitle options.

Fazit: "Terror Z - The day after" is stuffed with clichés and wooden characters. Nevertheless, this zombie apocalypse is quite entertaining and even a little bit exciting after a rather sluggish beginning. In terms of craftsmanship, director Christopher Rosevelt reveals some potential, which, however, is still expandable in dramaturgical terms. Nevertheless: an entertaining contribution to the genre, which also tries to offer a little something new and which presents itself on the DVD in decent picture and sound quality. Worth seeing