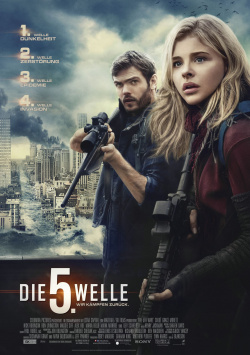 It wasn't that long ago that Cassie (Chloë Grace Moretz) was a normal teenage girl. She spent a lot of time with her best friend, raved about her classmate Ben (Nick Robinson) and had big dreams for her future. But all this has been over since aliens struck Earth. In four waves of attacks to date, several billion people have been killed on the planet, including Cassie's parents. Now there is only her and her little brother Sammy (Zackary Arthur), whom she believes to be safe in a military base. At all costs, Cassie wants to make it to the base to be reunited with her little brother. On the dangerous way there she allies with the young Evan (Alex Roe), who also lost his family to the aliens. Together they want to make it to the base before the next wave of attacks, unaware that Sammy is being prepared for a final battle there with other children - for the fifth wave…

With "Die 5. Welle" director J Blakeson has adapted the first volume of Rick Yancey's bestseller, conceived as a trilogy. As in many other novel series for young adults, a teenage heroine is at the centre of a dystopian story. However, in the first half of the movie it doesn't really matter that many elements are recycled, which you have already come across so often in "Panem" and Co. Because Blakeson succeeds excellently in drawing the image of a devastating alien invasion, which takes place in a completely different way than one would expect. There are no monster or spaceship attacks here. Here people are first deprived of electricity before nature is used against them. The real enemy is hardly to be seen here. He just casts a threatening shadow on the survivors and leaves them completely in the dark about when he will start the next wave of attacks, what it will look like and if it will be the last, everything will be decisive.

This creates a depressing mood in the first hour, which is intensified by a high level of tension. Here the story and its cinematic realization reveal a potential that gives hope for great cinema. But unfortunately this is not used. Because in the second half the whole then falls into the usual target group machinery and builds up an unnecessary love triangle, which will provide in the further parts still for complications. Even though the big twist that is revealed in the course of the last act isn't uninteresting, there are still too many clichés in this part of the movie that are too uninspired and cloaked for real enthusiasm to emerge. This is still entertaining and sometimes really good. But after the strong introduction the plot and the somewhat kitschy implementation is clearly a qualitative descent.

The actors, especially Chloë Grace Moretz, give their best to play against it. But the script puts too many obstacles in their way for them to succeed in the end. It's a pity that the movie, which reveals a certain courage in its opening sequence and promises an extremely dark, gripping end-time drama, drifts into shallow teenage waters at the end. Nevertheless: even though this is a waste of potential and a certain disappointment will spread among many viewers, "The 5th Wave" isn't a bad movie overall. Especially the younger target audience of 14 years and older is offered very exciting entertainment cinema, where you can still have a lot of fun beyond the age of 30 - at least over long distances. And despite the weaker second half there is still a decent one for that: Worth seeing!