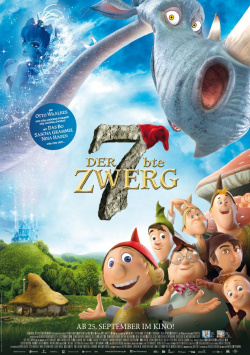 The 18th Birthday was supposed to be a very happy day for Princess Rose. As soon as she is of age, a dark curse falls from her, with which she was once occupied by the nasty ice fairy Dellamorta. She just needs to make sure she doesn't hurt herself on a sharp object until midnight. No wonder that the king does everything in his power to ensure that this day ends without his beloved rose falling victim to the curse. But Dellamorta still has a bad ace up her sleeve. And indeed their curse becomes reality and the whole Fantabularasa Castle falls into a 100-year deep sleep. The whole castle? No: the seven dwarves Bubi, Cooky, Sunny, Speedy, Tschakko, Ralfie and Cloudy barely escape the spell, which is triggered by an accident of Bubi. To make up for this, the 7 dwarves want to save the princess and the other inhabitants of the castle. But they don't just have to find Rose's true love and bring it to the castle. You must also escape the attacks of Dellamorta. And at least she has a dragon with which she fights against the seven little heroes…

"The 7th Dwarf" is probably one of the most unnecessary films of the year. That's not to say it's the worst movie ever. That's definitely not the case, but there will probably be only very few viewers who really waited for this work of art. The two "Seven Dwarfs" films with Otto Waalkes and Co. were not so successful because they would have been particularly good films, but because the comedians, who acted alongside the always popular Otto, were enormously popular in the middle of the 2000s. But not only that the success of Martin Schneider, Ralf Schmitz and Co. seems to have passed its zenith in the meantime. The decision to replace them with not necessarily recognizable animation variants of themselves should reduce even the interest of extremely hard-boiled fans of the comedians to a minimum.

That wouldn't be too bad if the film could otherwise score with charm, wit and a little originality. But even here, "The 7th Dwarf" is simply not convincing. Some characters are optically absolutely brazen in Disney movies like "Rapunzel", many gags are stolen in "Sherk" and Co. or simply recycled from the two real films. And the fact that only another "Sleeping Beauty" version was chosen for the main frame of action is only limited evidence of the ingenuity of the makers. Sure, there are some nice moments and proper jokes. But the necessary spark simply does not want to jump. Because since everything seems to be known somehow and sometimes very obviously stolen, there is more than a tired smile in it for the viewers.

Six years ago "The 7th Dwarf" might have been able to generate some viewer interest. But eight years after the last "dwarf" film, it would have taken much more than this seemingly uninspired little animated film to really meet with widespread enthusiasm. The animation team has done good to very good work and there are a lot of scenes that especially younger viewers will have fun with. And the participants should not be denied that they put a lot of heart and soul into the production and that they had fun doing it. But it doesn't make the fairy tale really good either. Should there really be viewers who were such big fans of the two real films that they are still happy about animated versions of the Zipfelmützen heroes and therefore don't mind the complete lack of any originality, they won't be bothered by the criticisms listed here and will spend an amusing time in the cinema. But if you hope for a charming and really funny animation adventure, you will be disappointed and bored when you leave the cinema. Therefore: only for small pointed cap fans between 5 and 8 or extremely loyal Otto fans worth seeing!