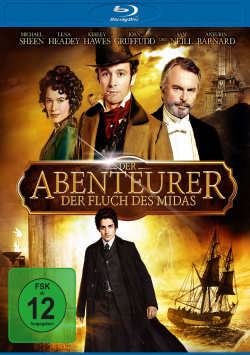 The Adventurer - The Curse of Midas - Blu-ray

Content: The world of 17-year-old Mariah Mundi (Aneurin Barnard) is completely thrown apart when his parents (Ioan Gruffudd & Keeley Hawes) disappear without a trace and shortly afterwards his little brother Felix (Xavier Atkins) is also kidnapped. With the help of the mysterious Charity (Michael Sheen), a friend of his parents, Mariah wants to try to free his brother from the hand of the kidnappers and solve the mystery about the disappearance of his parents. All traces lead to the Prince Regent-Hotel on a small island off the English coast and its new owner Otto Luger (Sam Neill). He is looking for the legendary Midas Box, which is said to be buried somewhere on the island and which gives its owner immense power. Under false names, Mariah sneaks a job into the hotel and gets closer and closer to solving the mystery. But also with the help of the young tailor Sacha (Mella Carron) he seems to be hopelessly inferior to the mighty Luger and his henchmen...

"The Adventurer - The Curse of Midas" is based on an adventure novel by G.P. Taylor. With a budget of almost 25 million dollars, director Jonathan Newman has created an exciting fantasy adventure for the whole family from the original, which is especially convincing on the visual level. It quickly becomes clear that the film should appeal to the same target group as the "Harry Potter" or "Narnia" adaptations. But unfortunately Mariah Mundi's first adventure does not reach their quality. This is not only due to the much smaller budget available to Newman. Rather, the story lacks dramaturgical grandeur, the staging lacks tempo and the leading actor lacks charisma.

Surely, the film has some very good moments, where especially younger fans of exciting adventure films will have their fun. But in many scenes Newman just doesn't find the right timing, which unfortunately reveals the weak points of the script far too clearly. Especially the scene that culminates in the kidnapping of Mariah's brother is a very good example of how a good moment of tension is completely destroyed by wrong timing. Also, the coolness of Michael Sheen's character is not used enough, which is really a pity. Because as soon as Sheen enters the scenery, the film gains considerably in entertainment value. Against him, the young leading actor Aneurin Barnard unfortunately remains extremely pale, which is why it would have been all the more important to let Sheen be used a little more often.

The potential that "The Adventurer - The Curse of the Midas" possesses is therefore only played to a very limited extent. Therefore, the expectations of this home cinema premiere should be reduced a little. But if you just want to see a simply knitted fantasy adventure for a young target audience that offers some good viewing values and a few successful moments of tension, you can take a look here. Worth seeing!

Picture + sound: The Blu-ray image is absolutely clean and has a high sharpness even in darker scenes. Together with the very powerfully mixed colours and the harmonious contrasts, even smaller details of the good equipment come into their own. The sound is present in a lively DTS-HD Master Audio Mix. The dialogues are well tuned to the music and the sound effects and sound clearly understandable from the speakers. Both smaller ambient noises and larger sound effects fill the multi-channel area with life again and again. Good!

Extras: As a bonus the Blu-ray has a good twenty minute making of to offer next to the trailer.

Fazit: "The Adventurer - The Curse of the Midas" is a nice adventure film, which has some very successful moments and a worth seeing equipment to offer. But the rather colorless main actor Aneurin Barnard and some elements of the plot that are too superficially implemented cloud the fun of this novel filming perceptibly. But the lively play of Martin Sheen, some good show values and family-friendly moments of tension make the movie, despite its weaknesses, a worth seeing home cinema premiere for all lovers of light fantasy adventures. The Blu-ray is technically very well implemented, the bonus offer is lean, but okay. All in all there is one more: Recommended!