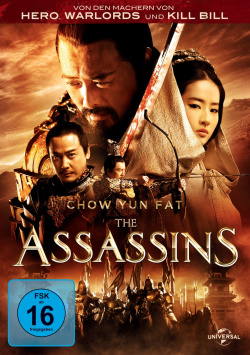 Contents: China in 198 BC: Years ago a prophecy predicted that a rare planetary constellation would lead to a change of power in the country. And indeed, everything looks like the end of the Han Dynasty has come and Chancellor Cao Cao (Chow Yun-Fat), Lord of Wei, will ascend the throne. But Emperor Xian (Alec Su) is not ready to surrender to his fate just like that. For years, he's been preparing to have his adversary killed. To this end, children from all over the country were abducted and trained with cruel methods to become perfect assassins. Among them is also Li Ju (Yifei Liu), who after successful training is scheduled to kill Cao Cao. But as she gets closer to the chancellor, she meets a man who embodies ideals for which he should not die. But not only the assassins of the emperor, also a traitor, who is very close to him, seems to have sealed the end of Cao Cao...

"The Assassins" is a visually stunning historical drama that features good actors, an opulent set and some first-class choreographed battle sequences. But even though the title and the poster motif promise a bit more action, Linshan Zhao's film as a whole is a rather quiet drama, which concentrates mainly on the political side of the story, on corruption and conspiracies. This works very well, especially because of Chow Yun-Fat's good play, but it also meets the expectations of many viewers.

As nice as the movie is to watch and as thrilling as the somewhat confused story may be at the beginning, the movie eventually suffers from the fact that it doesn't manage to stand out from the mass of similar works, which deal with the time of the Three Kingdoms. The fighting sequences are well done, but overall they just don't get the attention they deserve. Scenes like the one in which a troop of warriors stretch ropes across the palace, on which they then move as if on a net, are fantastic to watch, but remain an exceptional phenomenon. The initial idea is also exciting, but in the course of the plot it gets more and more lost in the conflict between Cao Cao and the emperor. The somewhat over-twisted game by Alec Su also doesn't necessarily help to give the movie a special touch.

As I said, there's nothing wrong with "The Assassins" in terms of craftsmanship. There is no doubt that all individual aspects can be assessed positively. But this does not result in an outstanding overall picture, but one that threatens to sink into the masses of similar works. If you just want a feast for the eyes and can't do without seeing something really new and surprising, this work can still be warmly recommended to you. Therefore: worth seeing with small restrictions!

Picture + sound: If there is one aspect that can be fully convincing in "The Assassins", then it is the opulent visual language. And this is shown to advantage on the DVD thanks to the powerful colouring, which is often dominated by warm shades of green, and a high level of sharpness of detail. The Dolby Digital 5.1 Mix is pleasantly dynamic even in the quieter scenes, as not only clearer sound effects, but also smaller ambient noises bring life to the surround channels. Good!

Extras: Bonus material is not available on the disc. Weak!

Fazit: "The Assassins" has a great set, some well choreographed fighting sequences, convincing actors and a story that seems a bit overburdened at the beginning, but is quite exciting overall. However, Linshan Zhao's historical drama does not succeed in standing out from the mass of works of a very similar nature. In addition, the title and cover suggest martial arts action, which the film ultimately offers only marginally. Rather, it's a mainly dialogue-driven feature drama, which is great to look at, but in the end has hardly any real sustainability. Therefore the whole thing is only worth seeing with small restrictions!