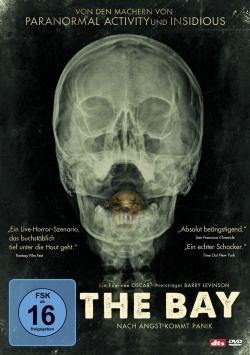 Film: In the bay off the small coastal town of Claridge, Maryland, the corpses of two marine researchers are found who were in the region due to an explosive analysis of the water in the bay. The death of the two is put as a shark attack quickly to the files, so that six weeks later the celebrations on Independence Day of the tragic event are no longer clouded. The young reporter Donna Thompson (Kether Donohue) will report on the festivities. She interviews the mayor (Frank Deal) of the city, observes playful children or the traditional crab competition. But suddenly the mood changes. Many people complain of painful skin rashes and the participants in the competition have to throw up violently. The emergency department of the local hospital quickly fills up, where it is certain that this is a particularly difficult type of viral disease. But then it comes to first deaths, with which even the epidemic centre called for help seems to be over-subjected. It's the beginning of a bloody horror scenario, at the end of which nothing in Claridge will ever be the same again...

With "The Bay" director Barry Levinson also dares to tackle the meanwhile worn out horror subgenre of the "Found Footage" movie. In order to achieve the authentic, documentary look, the Oscar winner staged his horror march with digital and mobile cameras, via Skype, webcams and surveillance cameras. This isn't exactly new and especially at the beginning a bit exhausting, but in the end this style works really well in this case. Since Levinson doesn't want to create horror with ghosts or other supernatural phenomena, but rather tells an eco-scare story anchored in reality, the pseudo-documentary style makes the whole thing seem almost credible. Since he occasionally uses excerpts from real news broadcasts and pictures of actually existing parasites, this feeling is even intensified.

Addicted, especially the last twenty minutes make it clear that "The Bay" is only a fictional horror story. Nevertheless, Levinson manages to anchor the whole thing in reality to such an extent that the viewer is not only entertained but also made to think. What means are allowed to bring economic prosperity to a region? What are people willing to hide when they get paid? How harmful is factory farming for health and nature? The film wraps questions like these in a dark coat, peppered with a threatening basic atmosphere and some really good shock effects.

Surely, the message of the story is not subtly presented. The enemy images are very direct, but unfortunately also very clichéd. It's this lack of dramaturgical cleverness that ultimately prevents the film from really making a lasting impression. It becomes clear again and again that Levinson, director of movies like "Rain Man", "Good Morning Vietnam" or the also very political "Wag the Dog", understands his craft. Despite its intentionally amateurish look, the horror movie is really well done in terms of craftsmanship. Nor is this the first time the filmmaker has tried to mix entertainment with ambition. Nevertheless, the whole thing seems a bit too bold and the dramaturgical structure a bit too unoriginal to actually meet the director's expectations. Nevertheless: if you like "Found Footage" movies with a good portion of oppressive eco-horror, you shouldn't miss this movie. Worth seeing!

Picture + sound: The scenes recorded with digital cameras usually have a good sharpness and a very natural-looking coloration. However, the shots taken with webcams, surveillance cameras or mobile phones repeatedly show slight to severe blurriness, image distortions or soiling. However, as these are deliberately used stylistic devices in order to obtain a credible "Found Footage" look, these weak points cannot be evaluated negatively. The sound of the two German soundtracks is somewhat more directional and less harmonic than that of the English Dolby Digital 5.1 Mix. But with all three soundtracks the dialogues are mixed well understandably and here and there a few atmospheric noises and sound effects provide a goose-bumps surround feeling. Good!

Extras: In addition to an interesting, but unfortunately not subtitled audio commentary by the director, the DVD also has a short featurette (approx. 11 minutes) and the trailer for the film.

Fazit: With "The Bay" director Barry Levinson now dares to approach the somewhat exhausted subgenre of "Found Footage" horror. But instead of ghosts and other supernatural phenomena Levinson relies on solid eco-horror, which can offer a very threatening atmosphere and some good shock moments - and at the same time makes you think a bit. If you don't have enough of the nodding camera look yet and would like to see how the stylistic devices of this genre are used for a different kind of horror, this DVD can be warmly recommended to you - even if it will take a few days until you will eat fish or chicken after the film. Recommended