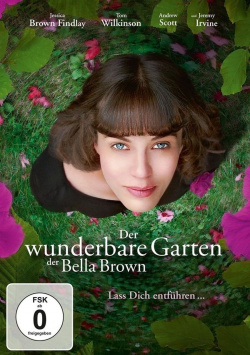 Film: The life of Bella Brown (Jessica Brown Findlay) is beautiful and harmonious if it follows exactly her order. And if you don't let nature get in the way. Because Bella and nature - that's not possible. Too bad that her grumpy neighbour Alfie (Tom Wilkinson) loves plants and can't watch Bella let her garden run wild. Without further ado he reports them to the property management and Bella has only one month to transform this chaotic something into a blooming oasis. But how is she supposed to do that? Especially since she can hardly concentrate on anything since she met the charming inventor Billy (Jeremy Irvine) while working in a library. And so the beautiful order that Bella Brown has painstakingly built up since childhood is seriously shaken - with unexpected consequences…

It may not sound immensely positive when you say about a film that it is nice or sweet. But exactly these words are perfect for "The wonderful garden of Bella Brown". And that doesn't mean that this little comedy is insignificant or not necessarily worth seeing. Rather, it means that the movie without any real corners and edges manages one thing first and foremost: That you as a viewer feel really well entertained, that you can escape from everyday life for 90 minutes and can also languish a little. The figures are slanted, dysfunctional or grumpy - and yet they are all adorable in the heart. The story doesn't foam over with originality and yet it is stirring enough that you like to get lost in it.

Director Simon Aboud already wrote the script for his second feature film in 2009. The fact that he wasn't able to realize the movie until seven years later can certainly be seen as a blessing, because he was able to cast Jessica Brown Findlay ("Downton Abbey") in the leading role, who is simply perfect for the role of the somewhat queer Bella Brown. But also Adam Scott, known as the "Sherlock" villain, in an extremely sympathetic role, Tom Wilkinson as militant garden lover and Jeremy Irvine as a consumed inventor, are really wonderfully cast.

The film focuses on quiet humour, dreamy images and many heartfelt moments. Cynicism is just as out of place here as the gloomy world view that prevails in many people's minds. "The wonderful garden of Bella Brown" says Yes to life and Yes to love in an almost childlike and playful way. And even if this may not be particularly profound and sometimes even a little banal, it is still a refreshing change from the many difficult and depressing things one is confronted with every day in the news, but also in many areas of art and culture. If you would like to enjoy 90 minutes of pure escape from everyday life and have remained a hopeless romantic in your heart, you should definitely pay a visit to the "wonderful garden of Bella Brown". Absolutely worth seeing!

>Picture + Sound: The clean picture of the DVD pleases with a good overall sharpness and very powerful colors, whereby the playful fairytale character of the film is well underlined. Overall, the visual implementation leaves a consistently positive impression. The sound remains restrained for the most part, dominated by the dialogues and the soundtrack. But there are also moments, such as a tempestuous scene in the truest sense of the word, in which the surround sound area of the home cinema system is well exploited.

Fazit: "Der wunderbare Garten der Bella Brown" is an enchanting comedy with wonderfully weird characters and playful humor, which has an almost fairytale character. A simply beautiful film, perfect for a cosy home cinema afternoon on the sofa. The DVD presents the film in good picture and sound quality. The bonus material consists of some promo interviews, but some of them are not really uninteresting. All in all there is a clear one for the DVD: Recommended!