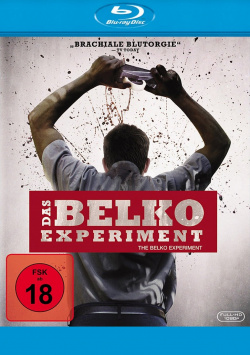 Film: The American office workers of Belko Industries in Bogotá, Colombia, are amazed when they are received on an otherwise ordinary morning by a new security service, which sends all local workers back home. A short time later, when the isolated building is hermetically sealed off, they also believe in a bad joke. But when they are then asked to kill three colleagues in the next 30 minutes and when there are actually deaths after this period, they realize that they are trapped in a horrible nightmare. And if it goes by the voice that gives them the commands via loudspeaker, only one of them will probably be able to survive this day. Now it's time to fight together for survival and not to get involved in the psycho-games - which gets more and more impossible every minute…

The Australian filmmaker Greg McLean has been known since his successful debut "Wolf Creek" for his like to take a somewhat harder step. This undoubtedly also applies to his latest work "The Belko Experiment". However, the movie isn't just a senseless slaughter. The script of James Gunn, the author and director of the "Guardians of the Galaxy"-movies, is responsible for this. Gunn has underlaid this office version of "Battle Royale" with a spiteful cynical tone, giving it a satirical touch. This is how McLean created a thriller that is both exciting and amusing, both extremely bloody and subtle.

Admittedly, there are some lengths in the middle section after all. The death of individual office workers is somewhat tiring in the long run. Moreover, the story doesn't seem surprising at this point. Even a few amusing dialogues won't help you to get over the boredom. But fortunately this low is only of short duration. Because towards the showdown it's time to get down to business - and there are also a few surprises, most of which at least one won't see coming.

The cast, which also includes James Gunn's regular actor Michael Rooker and Gunn's brother Sean (Kirk from the "Gilmore Girls"), is decent, but doesn't really get a chance to reveal a wide range of acting skills. But that's not what this is about. "The Belko Experiment" is a breathless struggle for survival, in which there is little time for long dialogues and a great character development, especially in the second half. It quickly becomes clear which characters are popular and which characters will turn into bloodthirsty killers.

However, even if there are dramaturgical weaknesses and very predictable character drawings, "The Belko Experiment" is still a great pleasure for genre fans overall, which with its ending makes you want another experiment. Worth seeing!

Picture + sound: The slightly subcooled coloration emphasizes the atmosphere of the film. The picture can also convince with a good overall sharpness and a harmonious contrast mixture. The lively 5.1 DTS Mix provides a lot of movement in the multi-channel range, especially when shooting. But also the dialogues, music and smaller background noises sound pleasantly powerful from the speakers. Good.

Extras: A short Making of (ca. 9:56 min.) explains "The rules of the game", followed by four amusing survival tips (ca. 2:37 min.) in wonderful kneading animation. Eight dropped scenes (ca. 5:19 min.), a picture gallery and the trailer round off the short additional offer.

Fazit: "The Belko Experiment" is a bitterly evil and very bloody satire, which shows some weaknesses dramaturgically and also doesn't go too deep when drawing the characters. But the fun factor is on a very high level over long distances. The picture and sound quality of the Blu-ray is at a good level. The bonus material is okay, but overall it turns out to be a bit meager. But the bottom line is clear: Recommended!