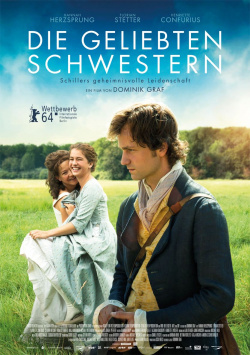 Actually, the young Charlotte von Lengefeld (Henriette Confurius) was to be raised by her godmother wife von Stein (Maja Maranow) in Weimar to become a court lady and perhaps even fish for a wealthy husband. But Charlotte feels completely out of place in courtly society. Only her older sister Caroline von Beulwitz (Hannah Herzsprung) can complain about her in long letters. But then she meets the young author Friedrich Schiller (Florian Stetter) - an encounter that will not only change her life but also that of the unhappily married Caroline forever. For when Schiller travels to Rudolstadt at Caroline's invitation to visit the two sisters, all three immediately recognize a soul relationship that grows into a triangular relationship, whose passion is soon expressed not only in coded letters…

"The Beloved Sisters" marks the return of director Dominik Graf to the big screen. The fact that he has mainly worked for television in recent years can be clearly seen in his latest work. For despite a harmonious setting and a few pictures that appear particularly impressive on the big screen, this unusual love story often seems more like a chamber play that would be better suited for television or perhaps even the theatre stage. Especially the play of the actors seems too "theatrical" and therefore just too bulky for the cinema. That's not to say that the acting is bad. On the contrary. Especially Henriette Confurius and Hannah Herzsprung deliver excellent results here. However, the game doesn't seem real, but too artificial, which can work well in the directness of the theater, but which is rather annoying in the cinema, since the access to the characters is unnecessarily difficult for the viewer.

The biggest problem of the movie, however, is the role of the narrator, which Graf has taken over himself. He mumbles down the narrative text so listlessly, that this feeling is quickly transferred to the viewer. The fact that the film already has to struggle with numerous tough lengths in the "short" cinema version (there is also a festival version that is over 30 minutes longer) is not exactly helpful. Certainly, "The Beloved Sisters" has some very beautiful and also intense moments. But in too many moments the different aspects of the production make it too difficult to let yourself be carried away by the events, than it would be possible to come to an entirely positive conclusion in the end.

There is no question that a lot of passion and talent was put into the work here. The camera work is just as convincing as the costumes and the actors also show that they tried to give their characters and the story a certain intensity. But apart from the feuilleton and a few lovers of great art cinema, only a few viewers will be able to make friends with Graf's production. If you don't mind the points of criticism listed here and have a weakness for German costume dramas, the interesting and in essence very nice story should be enough to justify going to the cinema. And for such spectators there is also one: Worth seeing! All others can wait for the TV broadcast of this WDR/BR/Degeto/ARTE/ORF co-production.