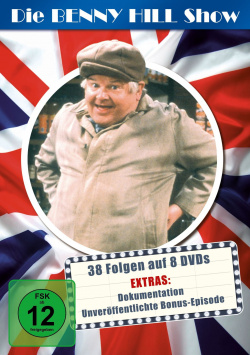 Film: Intriguingly silly slapstick, ambiguous jokes, persiflage on soap operas, celebrities or commercials, lightly dressed ladies and lots of running jokes - that was the recipe for success of the "Benny Hill Show", which ran successfully on various stations in Great Britain for a total of 33 years. It remains to be seen whether the series was actually discontinued because of the high production costs or because of the accusations of sexism Hill was exposed to. The fact is that Alfred Hawthorn Hill, born in Sothampton in 1924, created one of the most successful British sketch comedy shows, which revolutionised the genre at the time and still has a great influence on the international comedy scene today.

"The Benny Hill Show" also enjoys absolute cult status with many fans in Germany. But not all episodes made it to Germany and some jokes lost a bit of charm and wit because of the synchronisation. Nevertheless, the series became an absolute hit in the RTL night programme and ran there for a long time in a continuous loop. Even if the ravages of time have gnawed a little at the sketches and especially the parodies are hardly comprehensible for many younger viewers, "The Benny Hill Show" is still damn funny 26 years after the end of the series.

That's mainly because Benny Hill wasn't too silly for any silliness and he has always fallen back on simply knitted patterns that are simply timeless in their way. Sketches, for example, that manage completely without words and in which the movements are simply played faster, accompanied by the unmistakable "Yakety Sax", may not be particularly profound, but make it almost impossible for the viewer not to laugh about them. Especially when the men in these clips always turn into the biggest fools when looking at attractive ladies and kick from one slapstick fat cup to the next, no eye really stays dry.

However, reducing "The Benny Hill Show" only to that would not do justice to the series. Because there are also some really cleverly constructed parodies, no matter whether it's news broadcasts, talk shows or soap operas. Especially delicious is a very special version of Agatha Christie's "Murder in the Orient Express", in which Benny Hill slips into the roles of various well-known US investigators such as Columbo. But even when a really bad soap deliberately incorporates extreme editing errors, it's simply timelessly funny.

No question, "The Benny Hill Show" isn't particularly challenging and celebrates classic slapstick, slippery ambiguities and completely exaggerated silliness. But this happens with a timeless charm and a humorous playfulness, so that especially as a child of the 80s you can still laugh about it today. And that's why for this box with all the episodes ever shown on German television there is one very clear one: Worth seeing!

Picture + sound: The picture and sound quality of the DVD is the age of the series quite noticeable. The episodes are presented in the original 4:3 full screen format. The colours are quite powerful and the overall picture sharpness is on a good TV level. However, there is always visible image noise, which also affects the sharpness of detail. In addition, smaller soiling can be spotted every now and then. For up to 35 years old raw material the overall result is quite decent. The same applies to the mono mix, which lets the voices sound clear and understandable from the home theater speakers, but which also reproduces ambient noises and smaller sound effects relatively bluntly. Too bad only that only the German dubbing is available, but not the better English original sound!

Extras: As a bonus the box has a very interesting documentary about Benny Hill (ca. 52:05 min., with German UT), as well as a bonus episode never broadcast in Germany in the English original (ca. 52:23 min., without UT). Both are absolutely worth seeing for fans!

Result: It may be hard to imagine that "The Benny Hill Show" can still win new fans today. But for those viewers who saw this comedy cult on TV when it was first broadcast, the sometimes very ambiguous jokes, the wonderful persiflage or the unrestrained silly sketches of Benny Hill might still be funny enough 26 years after the end of the series to justify the purchase of this beautiful DVD box. The 38 episodes present themselves in decent picture and sound quality. As a bonus there is a very interesting documentary about Benny Hill, as well as an episode in English language version which has never been shown in Germany before. All in all, there are enough good reasons that lead to this conclusion: absolutely recommended!