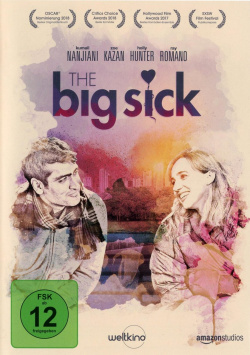 Film: Kumail (Kumail Nanjiani) dreams of a great career as a stand-up comedian. But he himself has very little to laugh about at the moment. He still performs in small clubs without payment and earns a little money as an over-driver. And when he is not plagued by money worries, his Pakistani family makes life difficult for him. She is so trapped in old traditions that they absolutely want to arrange a marriage for Kumail and introduce him to a new candidate willing to marry at every family dinner. But for the young comedian this is out of the question. He wants to fall in love normally - and that's exactly what happens to him one night after a gig when he meets Emily (Zoe Kazan). Although both are immediately attracted to each other, they still prefer to stay single. This is easier. But the heart wants what the heart wants, and so they become a couple. It's just too bad that Emily doesn't live up to what his family expects from a future girl…

It sounds pretty hackneyed by now, but "The Big Sick" makes it clear once again: Life simply writes the most beautiful stories. This great romantic comedy of a slightly different kind is actually based on the true story of Kumail Nanjiani and - spoiler alarm - his wife Emily. The family conflict was, of course, presented in a somewhat exaggerated way for the film's processing. But this works very well, because it gives the dramaturgy an additional conflict. As in real life, Emily fell ill shortly after she met her and fell into a coma. The fact that they were no longer a couple in the film because of Kumail's family at that moment, but that he was still with her all the time and thus also established a special relationship with her parents - wonderfully played by Ray Romano and Holly Hunter - gives the film a charming charming touch.

In the USA "The Big Sick" quickly developed into the absolute favourite of critics and audiences. The reason for this is quickly discovered: This film simply makes you happy. The humor is pleasantly fresh, the characters are somehow very lifelike and the more dramatic moments manage without any form of kitsch and overstrained clichés. The script, which Kumail and Emily wrote themselves, is full of biting wit and heartwarming dialogues. Writer, director and actors bring characters onto the screen, with whom you as a spectator unbelievably enjoy spending time and in whose presence you really feel comfortable.

"The Big Sick" is like a cozy embrace around its audience, from which one only reluctantly wants to leave. A wonderful film that shows that it doesn't need big special effects, furious car stunts or superheroes to offer great cinema. Sometimes a little story from real life is enough to give the audience the most beautiful romantic cinema fairy tale of the year. Absolutely worth seeing!

Picture + sound: There is nothing wrong with the technical implementation of the film. The very warm colours and the good sharpness of detail ensure that the visual implementation leaves an all-round positive impression. For a small comedy like this not uncommon the sound is rather reserved. Big surround moments shouldn't be expected. However, the dialogues and the soundtrack are well coordinated, which is why there is a contented "good" here as well.

Extras: This is a really good bonus package. It starts with a very lively, entertaining and informative audio commentary by Kumal Nanjiani and his wife Emily, director Michael Showalter and producer Barry Mendel. The optional subtitled commentary is always especially interesting when the couple reveals what really happened and what was changed in the story for the film.

Besides the commentary there is a nice making of (ca. 14:10 min.), as well as a look at the Big Sick Comedy Tour (ca. 9:57 min.) with stand up performances of some actors. It should have been a little more of that. Promo interviews with Kumail Nanjiani and Emily Gordon (approx. 3:08 min.), Zoe Kazan (approx. 4:26 min.), Michael Showalter (approx. 2:25 min.) and Kumail Nanjiani alone (approx. 3:38 min.), 5 short promo featurettes (approx. 12 min. in total) and 8 cut scenes, which unfortunately cannot be watched in one piece (approx. 10 min. in total) complete the additional offer together with the trailer.

Fazit: "The Big Sick" was an absolute surprise success in the USA. In Germany, unfortunately, not so many people have been lured into the cinemas by this unusual and true love story. Now the wonderful comedy hopefully finds the audience it deserves in home cinema. The DVD is absolutely convincing in terms of picture and sound quality and also offers a lot of good extras. That's what it's all about: absolutely recommended!