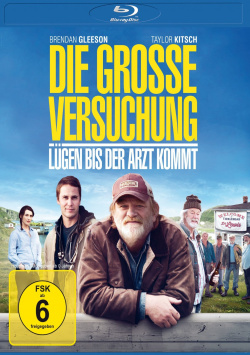 The big temptation - lies until the doctor comes - Blu-ray

Film: The inhabitants of the small harbour village Tickle Head are desperate. After the fishing grounds are exhausted, the once so idyllic village on a small island off Newfoundland plunges into a deep crisis. Most of the inhabitants live from the support, which, however, allows only a very modest life. But then there's a glimmer of light on the horizon. A large company is considering building a factory on the island that would finally provide work for the inhabitants of the village. However, there is a small problem: the board of the company demands that there must be a doctor on the island. But no doctor wants to settle in this wasteland. And the inhabitants have little time to convince anyone with a doctorate that Tickle Head is a little paradise.

But then fate again means well with the inhabitants of the village. After the young plastic surgeon Dr. Paul Lewis (Taylor Kitsch) is caught with drugs in his luggage by the former mayor of Tickle Head at the airport, he is ordered to practice on the island for a few weeks. Murray French (Brendan Gleeson), the head of the village, now devises a plan to seduce the young doctor into permanent employment and bring the factory to the village. What seems to work well at the beginning, plunges the whole village into a very amusing chaos in a very short time, which threatens to make the actual destination slide into the far distance again.

"Die große Versuchung - Lügen bis der Arzt kommt" is an almost identical remake of the successful francocanadian comedy "Die große Verführung" from 2003. Author Ken Scott has only marginally changed his screenplay with the help of Michael Dowse, so that connoisseurs of the original only get to see really little new here. Actually such a 1:1 copy should be dismissed as completely unimaginative and nonsensical. But in this case it's damn hard, because this version of the charming story works very well - and in some respects even better than the original.

This is not only due to the picturesque scenery of Newfoundland and the wonderfully dry humor. Rather, it is the wonderful actors who make this second infusion of the story so worth seeing. First and foremost the Irishman Brendan Gleeson, who is simply magnificent as a Canadian roughneck. Murray's imaginative attempts to wrap the young doctor around his finger, which were still a bit awkward at the beginning, gain additional humour due to Gleeson's charmingly brittle game, which clearly intensifies the already extremely high feel-good factor that the film radiates. And so the plan to show Tickle Head as a paradise that you don't want to leave so quickly works, at least for the audience.

Even though the slightly socio-critical aspects of the story degenerate into a minor matter, as does the suggestive possibility of a romance between Dr. Lewis and the pretty island girl Kathleen (Liane Balaban), the staging seems very mature and coherent overall. The small emotional spikes, which director McKellar repeatedly adds, aren't completely covered by the humor, but can also provide some light goose bumps besides the many laughs. The result is an extremely sympathetic overall picture, which simply releases the viewer happily into reality after just two hours. And that's exactly why the film is forgiven for sticking so closely to the original and hardly breaking new ground. Absolutely worth seeing!

Picture + sound: The wonderful landscape of Newfoundland comes into its own on the Blu-ray thanks to the harmonious colour scheme and the high overall sharpness. The colours are very warm and powerful, which makes them a good match for the atmosphere of the story. The disc also leaves a very positive impression with the contrasts and the adjustment of the black values. The sound backdrop remains rather unobtrusive, while the natural ambient noises such as wind and sea ensure a pleasant utilization of the surround channels. Good!

Extras: The disc does not have much additional material to offer. The best extra is undoubtedly the audio commentary by lead actor Brendan Gleeson and supporting actor Mark Critch. Both deliver a very relaxed, often amusing, but also informative entertainment, which is offered without subtitle option. If you have a good command of English, you should definitely listen here.

In three short promo clips, Mark Critch then talks about the film (approx. 5:50 min. in total). In addition there are short impressions of the Red Carpet at the Toronto International Film Festival (approx. 1:34 min.), short interview excerpts with the cast (approx. 1:57 min.) as well as the trailer for the film.

Fazit: "The Great Temptation - Lies until the Doctor Comes" is an almost identical remake of the 2003 comedy "The Great Seduction". This version of the amusing story does not really give new impulses. Nevertheless, the wonderful actors and the charming humor make the movie not only extremely worth seeing, but at times even better than the original. The Blu-ray presents the comedy in very good picture and sound quality. The additional material, on the other hand, is somewhat lean. Altogether applies: For lovers of small, loveable comedies in the style of "Local Hero" this disc is absolutely recommendable!