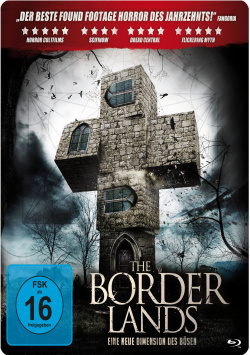 Content: The London technology freak Gray is convinced that it will be an easy and quite entertaining task to expose the mysterious events in a church in the English province as fraud. For his clients, the Congregation, Gray should ensure that every step of the investigation is recorded on video. Gary has to equip himself, team leader Mark and his locked colleague Deacon with cameras, which have to be activated during the whole time of the examination. For Gray, the whole thing is a lot of fun, which is also well paid. But soon there were strange events in Father Amidon's church that were difficult to explain. And although the experienced Deacon assures the newbie Gray that there is a logical explanation for every supposedly supernatural appearance, there does seem to be a force at work in the church that has nothing to do with modern technology, nor with God. Because what's waiting for the investigators here is something so unimaginably evil that it can only come from hell...

The horror subgenre of found footage films is badly worn after the enormous success of the "Paranormal Activity" series and its countless copies. What was revolutionary and fresh with the "Blair Witch Project" at the time is now completely overused and usually no longer causes goose bumps, but only boredom. But every now and then there are still some little highlights that manage to create tension even on well-trodden paths and to surprise a little bit. The British found footage thriller "The Borderlands" is such a case.

The film clearly follows the rules of this subgenre. Thus, even here in the first third relatively little happens and one actually only observes the protagonists in their rather boring hustle and bustle. At some point the horror slowly but surely breaks in, and in the case of "The Borderlands" this works out really well. That's because director Elliot Goldner manages very well to build up a very engaging basic atmosphere in which the supernatural horror can unfold very well. Even small signs of uncanny occurrences have a goose-skin effect in this atmosphere, which makes the viewer quite captivated by the action even in the quiet moments.

The last third is horror at its best. Even if the final may leave a few questions unanswered, it has a very intensive and lasting effect. What's also good for the movie is that the meanwhile really annoying nodding camera optic is largely avoided here. Many of the cameras used to capture the action are permanently installed, which is why the image is pleasantly quiet in many scenes. And even when handheld cameras are used, the wobble is kept within tolerable limits.

"The Borderlands", of course, does not reinvent the found footage genre. The film, however, is in the mass of countless boredomers a well-done reminder of what made this subgenre so successful. And also because not only is the Found Footage look enough to create suspense, but it also requires a captivating story, peppered with some good shock effects. And that's exactly what this small but fine horror pearl has to offer, which is why in the end there is also a pleasantly creepy "worth seeing"!

Picture + Sound: As with many other found footage films, there are again some image distortions and blurriness, but these are deliberately used stylistic devices and can therefore not be evaluated as a weak point in the audiovisual realization. Since director Golder has found a way to use a quite calm camera work in many scenes, a good picture sharpness and an authentic coloring can often unfold. The sound is mixed rather discreetly, but especially in the second half of the movie with some very atmospheric surround effects it can give you goose bumps. The dialogues are mixed in a way that is easy to understand. Good!

Extras: As a bonus, the Blu-ray only has a few program tips to offer.

Fazit: "The Borderlands" is another contribution to the meanwhile badly worn sub-genre of Found Footage Horror. But Elliot Goldner has not only found stylistic ways to stand out from the mass of similar works. The renunciation of all too shaky scenes and the story enriched with some very effective shock moments make "The Borderlands" a solid goose bump thriller with a disturbing finale. The Blu-ray is technically well implemented, only the complete lack of extras is negative. Still: if you like found footage horror and supernatural mystery food, you shouldn't miss this movie. Recommended!