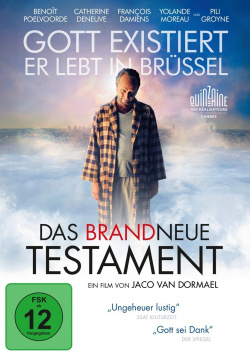 Film: It actually exists! God exists. And he does not live in heaven on a cloud. No, he looks down on us from a dreary high-rise apartment in Brussels, where God (Benoit Poelvoorde) lives with his wife (Yolande Moreau) and his daughter Éa (Pili Groyne). Most of the day, God sits at his computer and thinks about new commandments to drive his sheep mad. And when the boredom is particularly great, a natural catastrophe or a new war is needed. At some point Éa has had enough of her father's moods, which he also leaves out on her. She hacks into God's computer and lets all people know the date of her death. This has drastic consequences for people's view of their lives, their beliefs and their conflicts. While Èa sneaks out of her apartment in the chaos for the first time in her life to search for six more apostles on Earth, her angry father tries to restore his original order. But for that he must also go among the people…

May one laugh about religion? A question that is unfortunately all too topical and extremely explosive at the moment. But "The Brand New Testament" shows how to do it: The film combines originality, pitch-black humour and poetry to a wonderful whole, which not only makes the viewer laugh about religion, but also inspires a critical examination of the world religions. The faith of the people is not mocked, but rather its abuse. Surely, if you have a general problem laughing about religion and if movies like "The Life of Brian" or "Dogma" are pure blasphemy for you, you will probably have a problem with this imaginative satire as well. But if you're more open-minded in this respect, like subtle humour and playful imagery, you'll get a truly wonderful, literally divinely amusing film.

The scenes alone, which show how differently people deal with the knowledge of when they will die, are simply great. There is especially one minor character who becomes the running gag of the movie. Of course we don't want to tell you more, but whenever this character appears, no eye remains dry. I promise! The six new apostles and their handling of the knowledge of their mortality are episodically illuminated. Not all of these parts work equally well here. There are wonderful moments that go to your heart. There are funny moments that put a smile on the face of the audience. But there are also some really exaggerated moments in which a little less would have been really more.

You could also accuse director Jaco Van Dormael of using other colleagues for some of his ideas. Yet, despite some weak scenes, some small lengths and some obviously stolen ideas the movie as a whole is so well done in all its aspects that the weaknesses are completely pushed into the background. You can lose yourself in the imaginative images, indulge in the obvious love of life and surrender to the disarming, bittersweet humor. And at the end it becomes clear that "The Brand New Testament" with all this conveys a really important message: It doesn't matter whether or in whom or what we believe - we only have this one life on our earth. And we should not waste this with hatred, greed or prejudice, but enjoy it at every moment. And this unusual and wonderful film definitely offers pure enjoyment. But there is a very clear one: Absolutely worth seeing!!

Picture + sound: The wonderful picture language of the film also shows to advantage in home cinema, whereby the picture shows a pleasant depth in many moments. The colours are powerfully mixed and the overall sharpness is at a very high level. Even in darker scenes the many small details are well recognizable. The sound is in a pleasantly dynamic Dolby Digital 5.1 mix, which not only lets the voices sound out of the speakers in a way that is easy to understand, but also ensures a lot of movement in the surround range with well implemented sound effects. Very good!

Extras: As a bonus there's a nice Making of (ca. 20:10 min.), in which Benoit Poelvoorde doesn't break out of his role as God and thus provides some very amusing moments. There is also a look at the special effects (approx. 4:43 min.), an interview with Benoit Poelvoorde (approx. 6:39 min.), another interview with director Jaco Van Dormael (approx. 10:03 min.), as well as a trailer and further program tips. Good!

Fazit: "The Brand New Testament" combines originality, pitch-black humour and poetry into a wonderful whole, which not only makes the viewer laugh about religion (and many other things), but also inspires a critical confrontation with the world religions. An enchanting, bitterly evil and thoroughly endearing fairy tale, which is presented on DVD in appealing picture and sound quality. In addition there is a good making of, interviews and more. Altogether this means: Absolutely recommendable!