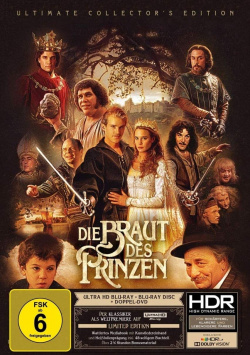 film: sentences like "Hello, my name is Inigo Montoya. You killed my father. Now you are of death", the dangerous RVAGs (rats of extraordinary size), the Wundermax and last but not least the wonderful music by Mark Knopfler are among the many reasons why Rob Reiner's ironically-influenced, uninhibitedly romantic fairy tale "The Bride of the Prince" has become a cult film that has lost hardly any of its charm, wit and originality even after more than 30 years.

It is all the more wonderful that with Turbine, a supplier has now taken on this enchanting film, which is known for bringing high-quality editions to the market with great attention to detail. Just think of the great wooden complete box of the series "Alaska of all places" or the great "Psycho Legacy" box. In addition, the label is known for its commitment to ensuring that pearls of the horror genre are removed from the index, restored and equipped with great bonus material and sold in Germany. Turbine also did a great job on the Ultimate Collector`s Edition of "The Bride of the Prince", both technically and in terms of equipment. But more about that later.

Based on William Goldman's "The Bride Princess" a grandfather (Peter Falk) tells his initially very sceptical grandson (Fred Savage) the story of the beautiful Buttercup (Robin Wright) and the stable boy Westley (Cary Elwes), whose young love is suddenly destroyed when Westley is supposedly killed by the cruel pirate Roberts in search of wealth and happiness. Desperate with grief, Buttercup agrees to marry the sleazy Prince Humperdinck (Chris Sarandon). Through a ruse Buttercup gets into the captivity of the crook Vizzini (Wallace Shawn) and his companions Fezzik (Andr&eacute; the Giant) and Indigo Montoya (Mandy Patinkin). Of all people, the cruel pirate Roberts frees her and Buttercup is pleased to discover that the masked stranger is indeed her Westley. Too bad that her rediscovered happiness is to be destroyed by Humperdinck and his handcuffs.

"The Bride of the Prince" has a very special place in the hearts of many people who grew up in the 1980s. And even though some aspects may not work out so well for today's audience and may seem rather outdated, even after all these years it still becomes clear very quickly why this fairy tale comedy is so popular. Rob Reiner ("Harry and Sally", "Stand by me") has found a very good mixture between real fairy tale and irony, between adventure and slapstick, between romance and comedy. He uses absurdities like the RVAGs again and again, but skilfully avoids letting his film slide into too silly slapstick.

On the other hand, he uses unrestrained fairy-tale romanticism, which can be quite heartwarming, but never drifts too much into unintentionally funny kitsch. And even if it gets a bit trashy or not every gag works, Reiner makes up for this shortcoming with a charm that works extremely well even after three decades. Moreover, the movie can score with a wonderful cast, from Peter "Columbo" Falk over a really wonderful Mandy Patinkin or an enchanting Robin Wright to the gorgeous Billy Crystal, who is hardly recognizable under the mask of Wundermax.

"The Bride of the Prince" is a timelessly beautiful fairy tale film, which plays with the many clichés of the genre in a humorous way and mixes them into a lovable whole, which after 30 years now shines in new splendor in this edition. Therefore, especially for children of the 80s: an absolute must for every home cinema collection!

picture + sound: The Blu-ray presents the film in really good picture quality. The age of the film is only marginally noticeable. Dirt or picture disturbances are not noticeable, instead the very powerful colors and the good to very good overall sharpness are pleasing, which keeps the fairy-tale look of the movie well. The Ultra HD Blu-Ray can even take it a step further, which is especially noticeable in outdoor shots.

The German sound, which is available in a DTS 5.1 and 2.0 mix, can be pleasing all in all with powerfully mixed dialogues and the well coordinated music. Also the sound effects can be heard here and bring the story to life in a very atmospheric way. For this there is a well-deserved: Very good!

Extras: While the early DVD releases in Germany had to do without bonus material, although the versions from the USA or Great Britain had numerous extras to offer, this edition finally offers all the extras to see and hear. It starts with the extensive 48-page booklet in which Tobias Hohmann guides the reader through the history of the film's creation, enriched with numerous pictures and international artwork. If you love the film, you shouldn't miss reading this booklet.

It continues with two audio commentaries on the main film, one by director Rob Reiner and one by author William Goldman. Even though both commentaries have to struggle with some very tough moments, they offer enough interesting anecdotes and exciting details about the making of the film to be worth listening to for fans. Praiseworthy: both commentaries are equipped with optional German subtitles.

The video extras start with a 30-minute two-part feature consisting of a 25th anniversary talk between Rob Reiner, Cary Elwes and Robin Wright, as well as a look at the impact of the film. This is followed by a featurette about the art of fencing (approx. 7:08 min.), a humorous look at the cruel pirate Roberts (approx. 11:43 min.), and two short documentaries about the fairy-tale background of the story (approx. 09:16 + 16:44 min.). In addition, the disc also offers a making of about the making of the film (approx. 27:19 min.), memories of the shooting (approx. 9:07 min.) in the form of the "untold stories", as well as a look at the work of the make-up artists (approx. 11:22 min.). In the archive there is also a video diary of Cary Elwes (ca. 3:56 min.), a Making of (ca. 6:35 min.) and a promo featurette (ca. 7:48 min.) from 1987, as well as trailers (including the one from Germany) and TV spots. Since some of these features were produced for different editions, there are some repetitions of the content here and there. Nevertheless, for the bonus material as a whole: A great package, which is definitely worth seeing, especially for fans of the movie!

The video extras can be found on the Blu-ray, as well as on the bonus DVD.

It must also be mentioned that this edition not only offers many extras, but also looks beautiful. The four discs are in a high-quality book edition with leather look, which gives the impression of a real fairy tale book. The whole thing is surrounded by a sturdy cardboard slipcase with an exclusive artwork by Paul Shipper.

Fazit: "The Bride of the Prince" has lost hardly anything of its wit, charm and originality even after more than 30 years. The loving and humorous mixture of fairy tales, cloak-and-dagger adventures and romance shines in new splendour in this wonderful edition. Besides the audio-visual enhancement, the beautiful design (including a great booklet), it also comes with lots of extras. The following applies: absolutely recommendable!