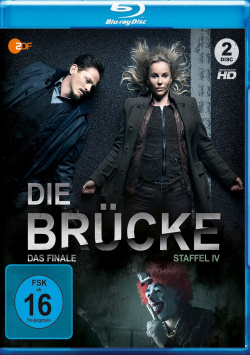 Content: Since Saga Norén (Sofia Helin) was blamed for her mother's death, the policewoman has been in prison, waiting every day for the court to recognize her innocence. Meanwhile, her partner Henrik (Thure Lindhardt) has to investigate a particularly cruel murder: The Director General of the Migration Agency in Copenhagen was buried up to her head at the foot of the bridge and stoned to death. With the Danish investigator Jonas Mandrup (Mikael Birkkjær) he follows the tracks that lead to an activist group. But is this only a cleverly spun deception? It doesn't take long and there is another victim…

It means saying goodbye to Saga Norén. "The Bridge" ends with this fourth season. But until the final almost eight extremely exciting hours pass, in which not only a gripping case has to be solved, which offers some unexpected twists and turns and remains surprising until the end - even if some elements may be quite predictable. This season also pulls out all the stops on a personal level. Not only the relationship between Saga and Henrik, but also his desperate search for his daughters, who disappeared years ago, are the focus of attention.

Whether the two investigators have a happy future and whether Henrick can find his peace of mind, of course this is not revealed here. But let me say this much: The series is brought to a round conclusion, which - and you are used to this from "Die Brücke" - is absolutely consistent in terms of character development. In this respect, it may be difficult to say goodbye, as one of the most interesting serial characters of the recent past takes her hat here. On the other hand, as a fan of the series, you can be more than satisfied with the way the individual storylines are brought to their conclusion. A bittersweet finale, which the great actors and the team behind the camera perfectly realized.

The last season of "Die Brücke" may have some small lengths, because just in the last third the story before the surprising home straight turns a little in a circle. But all in all, the viewers are offered thrilling television entertainment on a very high level again, which can convince with good actors, an oppressive atmosphere and an excitingly told story. With this in mind: buckle up and drive over "Die Brücke" one last time - it's worth it! Absolutely worth seeing!

Picture + sound: The picture can also score in the finale with its atmospheric coloration and a tidy sharpness of detail. Image noise or even dirt cannot be detected here. The sound is dominated by dialogues and the restrained soundtrack, but from time to time the DTS-HD Master Audio 5.1 Mix also features well-used sound effects to ensure that not only the tension increases, but also that there is a little movement in the tonal action. Good.

Extras: On the second disc there are some interviews with Sofia Helin, Thure Lindhardt and the makers of the series about the development of the characters, the end of the series and the question if there will be a fifth season after all. Not much, but well worth seeing for interested spectators!

Fazit: The fourth season of "The Bridge" is the successful conclusion of an outstanding crime series, which has one of the most interesting and unusual main characters in recent TV history to offer. That's why saying goodbye to Saga Norén is a little difficult. However, it is also good that this figure and her unconventional nature were not overused. So the series can still say goodbye to the audience at its qualitative level. The latest episodes will be presented on Blu-ray in good picture and sound quality. And there's also a few interviews as a bonus. Very clear: absolutely recommendable!